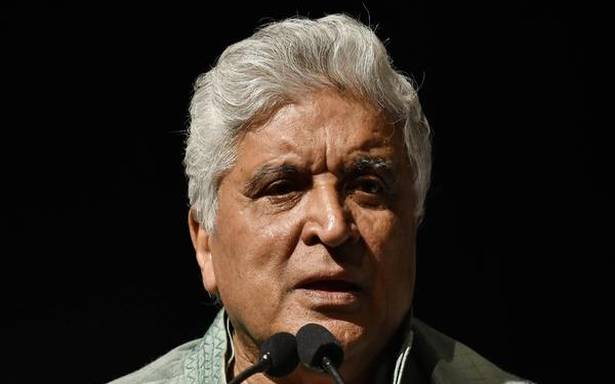 Noted poet-lyricist Javed Akhtar’s comparison of the Rashtriya Swayamsevak Sangh (RSS) with the Taliban was utterly misplaced, said the Shiv Sena on Monday. Analogising a fanatical movement with Hindutva constituted an insult to Indian culture, it noted.

An editorial in Sena mouthpiece Saamana observed that despite being a Hindu majority country, Indian governments had successfully raised the flag of secularism.

“How can you say those who favour the concept of a ‘Hindu Rashtra’ are of Talibani mindset? We [the Sena] do not agree with this…The proponents of Hindutva only want that Hindus should not be sidelined. While you can have differences with the RSS, to call their philosophy Talibani is completely wrong,” said the editorial, rebuking Mr. Akhtar.

“At the moment, anyone perceived to be intolerant is labelled ‘Taliban’ because the Taliban regime in Afghanistan is the biggest threat to society and mankind presently. Nations like Pakistan and China have supported the Taliban regime because in these two countries, human rights, democracy and individual freedom have no value. But this is certainly not the case with India and we are an incredibly tolerant country. That is why it is not appropriate to compare the RSS with the Taliban,” the editorial stated.

Mr. Akhtar, in an interview with a television channel, had taken a thinly veiled jibe at the RSS without naming the outfit, by remarking there was “an uncanny resemblance between the Taliban” and those “who wanted a Hindu Rashtra” (Hindu-dominant nation).

Objecting to his remarks, the Sena nevertheless pointed out that he was well-known for his outspoken statements and laudable onslaughts on communalism, extremism of every kind, terrorism and fundamentalist behaviour. “On every occasion, whenever fanatism or any kind of socially divisive behaviour has manifested itself in the country, Javed Akhtar has torn the masks of those fanatics. He has sung ‘Vande Mataram’ irrespective of fundamentalists’ threats. But even so, we do not accept his comparison of the RSS with the Taliban,” it wrote.

‘Hindutva is a culture’

The bloodshed, violence and degradation of the human race that accompanied the Taliban’s rule in Afghanistan was “heart-breaking”. “Millions have fled the country in fear of the Taliban, and their atrocities against women continue. Afghanistan has become hell…the Partition which led to the creation of Pakistan was predicated on religion, while the proponents of a Hindu nation only wish that the majority of Hindus should not be shunted aside and their rights respected… ‘Hindutva’ is a culture and people of the community justly demand the right to stop those who attack it,” said the editorial.

It claimed that the RSS had not approved of the religious hysteria that had accompanied the beef ban issue.

“The official religion of nations like China and Sri Lanka is Buddhism; that of the United States and European nations is Christianity, while the Muslim-majority nations call themselves ‘Islamic Republics’… but despite there being a majority of Hindus in India, the nation today is flying the flag of secularism. So, it is a reasonable expectation that the majority of Hindus should not be suppressed continuously… Javed Akhtar, is what we are saying right?” asked the Sena.

As the BJP clamouring for an apology from Mr. Akhtar, security was increased outside his home in Mumbai’s Juhu area.