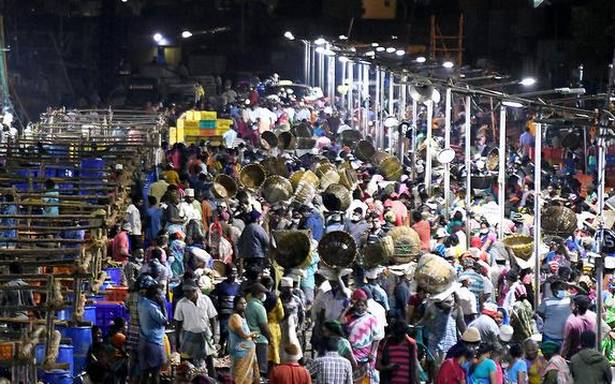 Thousands of city residents and retail vendors threw COVID-19 safety protocols to the winds and thronged fish and wholesale markets on Saturday, ahead of the Sunday lockdown.

Despite restrictions being announced, the Koyambedu wholesale market and Kasimedu fishing harbour witnessed huge crowds.According to wholesalers in Koyambedu, the market received nearly 5,000-6,000 small commercial vehicles since Friday night against the daily average of about 3,000. This led to heavy traffic around the market till Saturday morning even though traffic regulations were in place.Similarly, arrivals of produce from other parts of Tamil Nadu and neighbouring States also increased to 400 trucks compared to 340 lorries on Friday, traders said.S.Chandran, president, Koyambedu Market Licensed Merchants Association, said nearly 30,000-35,000 retail merchants might have visited the market on Saturday. Individual customers are still not allowed entry into the premises.Nearly 85% of the stock, particularly green vegetables, were sold and stock of onion and potatoes remained unsold. The prices of most vegetables had stabilised, except for a few, like carrot, drumstick, beetroot and ladies finger. On Saturday, abundant arrivals had also led to a drop in prices of several vegetables by 5 a kg, he said.At Kasimedu, though wholesale auctioning had been segregated from retail sales, buyers rushed to both spots trying to get the best price and quality. “Auctioning began sometime after midnight and went on till early morning. But retail vendors and buyers lacked discipline and rushed to buy fish at the auctioning wharf. Segregation could not be done due to large numbers,” said M. Dayalan of Indian Fishermen Association.Nanjil Ravi, a community leader, said that due to the restriction in number of fishing boats coming in, fish was not available in the required quantities. “This drove up the prices and many went back home empty handed. Better regulation is needed in the market to protect the interests of all stakeholders,” he said.Sources in the Fisheries Department said that steps would be taken to construct a wall between the wholesale and retail areas inside the fishing harbour with the permission of the Chennai Port Trust under whose control the harbour falls. “At 7.30 a.m. we announced that retailers must move out to the space allocated for them. But when many did not listen, we had to literally remove the fish and drive away buyers,” said an official.

Other markets and even retail vegetable and provision shops witnessed crowds. “It took me more time than usual to buy vegetables and fruits on Saturday. It seemed as if people were shopping in panic,” said B. Narayanan, a resident of PTC Quarters.