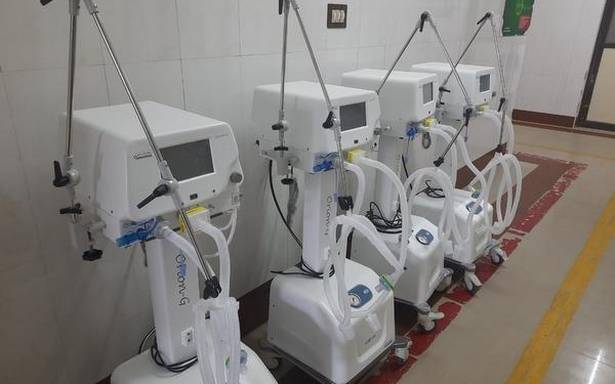 In affidavit in SC, Ministry says country has only 1,224 oxygen tankers and that is being increased to 2,000

The Union Home Ministry claimed in an affidavit in the Supreme Court on Tuesday that since October 2020 as many as 10,787 ventilators have been installed in various hospitals across the country.

There is a sudden upsurge in demand for ventilator beds in many States amid the second wave of COVID-19 with over 3 lakh cases being reported daily. Many patients with serious conditions require ventilators for lung support.

The Ministry said that post-April 1, following requests by the State governments, 3,835 additional ventilators had been dispatched. It said that in April, “oxygen concentrators received in donation from other sources” had also been given to the States.

The Ministry said the machines were purchased by the Union Health Ministry and there was no mention in the affidavit if they were procured from the PM-CARES fund.

The Prime Minister’s Citizen Assistance and Relief in Emergency Situations Fund was created on March 27, 2020. Though the government has claimed that it is a “public charitable trust,” it is not subject to audit by the Comptroller and Auditor General or answerable under the Right to Information Act (RTI).

In a statement on May 13, 2020, the Prime Minister’s Office said PM-CARES would allocate ₹3,100 crore for COVID-19 relief, including funds for ventilators, migrant workers and vaccine development.

On March 12, the Union Health Ministry told the Lok Sabha that till March 5, as many as 35,269 out of 38,867 ventilators were installed and the “total amount incurred by the government for procurement” was ₹1,850.76 crore.

The affidavit said that before the pandemic, “India had only around 16,000 ventilators in its public sector hospitals” and before April 2020 orders were placed for 60,948 ventilators, including 58,850 pieces under the Make-in-India initiative.

The affidavit also said that India has only 1,224 oxygen tankers with a capacity of 16,732 MT and that is being increased to 2,000 by converting 600 nitrogen and argon tankers to transport oxygen.

It said 138 cryogenic tankers to transport oxygen were being imported. The Indian Oil Corporation Limited (IOCL) plant in Nashik is also manufacturing 50 tankers.

The affidavit said orders had been placed for additional 1,27,000 oxygen cylinders on April 21 and deliveries would start by April 30.

It mentioned that an empowered group of officers had asked the States with high case load to list their demand of medical oxygen. It said that while the demand in Maharashtra was expected to be beyond the available production capacity of the State, States like Madhya Pradesh did not have any production capacity to meet their demand for medical oxygen.

“It is apparent that there has been a sudden increase in the projected medical oxygen required as on April 20 between the initial estimate and revised estimate submitted by Delhi (133%) and Uttar Pradesh (100%),” the Ministry said. The forecast for requirement of medical oxygen by 12 States had been revised to 6,593 MT for April 30 from 4,880 MT projected on April 20.