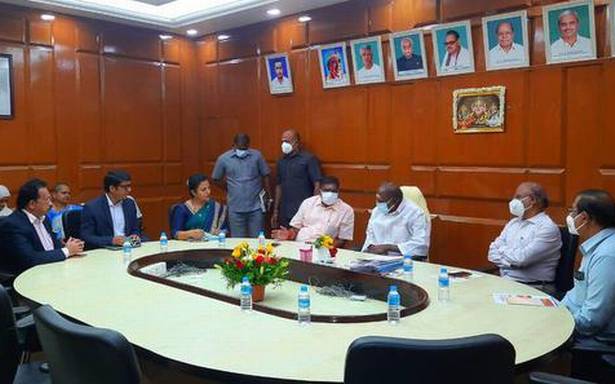 A Singapore-based firm has evinced interest in setting up a Medicity in T. R Pattinam at Karaikal.

Secretary, Industries, E. Vallavan told The Hindu that the team made the visit on the invitation of the Minister to explore the possibility of making investments in the Union Territory.

The firm had already purchased 25 acres of land in T. R Pattinam for establishing the facility, he said adding that the Chief Minister had assured them of processing the applications fast.

The idea was to establish a multi-speciality hospital and training centres in the medical field, the Secretary said.

An investors meet will be jointly held by the Industries Department, Confederation of Indian Industry and Velli Ventures Inc on September 16 in Puducherry. The meet would focus on attracting investments in sectors such as Information Technology, automobile industries, pharmaceuticals and organic farming, he added.

“The meet will be purely outcome based, where the government will be putting in place a system to provide preliminary clearance for establishing firms in UT. The firm has promised to get investors for investing in Puducherry,” the Secretary said.

The Minister had also directed the department to revisit the Industrial Policy to make it more attractive for investors, he added.