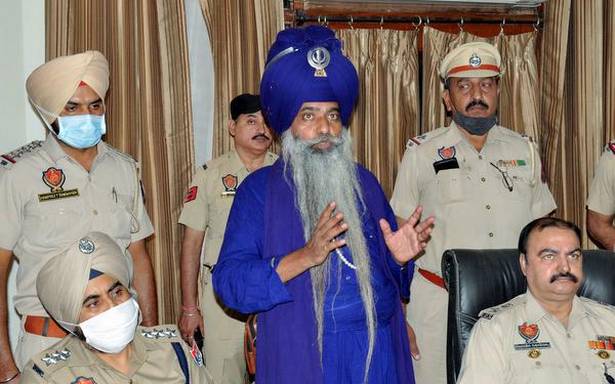 Three people allegedly involved in the lynching of a labourer at a farmers’ protest site near Singhu border were remanded to six days in police custody on Sunday as the Haryana Police set up two Special Investigation Teams to probe the incident.

So far, four people have been arrested in connection with the gruesome killing.

Narain Singh, a member of the Sikhs’ Nihang order, was arrested on Saturday from near Amritsar. Two more Nihangs, Govindpreet Singh and Bhagwant Singh from Fatehgarh Sahib, "surrendered" on the same day before the Sonipat Police in connection with the lynching.

Explained | Who are the Nihangs?

The three accused were produced before a court in Sonipat which remanded them to six days in police custody.

The police sought remand of the accused on the ground that they have to reconstruct the scene of the crime, recover weapons and clothes of the accused, besides interrogating them in detail about the entire incident.

One SIT headed by IPS officer Mayank Gupta, who is the Assistant Superintendent of Police, Kharkhoda, Sonipat, will investigate the videos of the incident which were circulating on social media.

The second SIT led by Deputy Superintendent of Police, Sonipat, Virender Singh will carry out the overall probe into the case.

The victim’s family had earlier questioned the attackers’ claim that he committed sacrilege and demanded a high-level probe into the case.

The mortal remains of the victim, Lakhbir Singh, were cremated at his native village in Punjab’s Tarn Taran district amid tight security in the presence of his family members on Saturday evening. Sarabjit Singh was the first to be arrested on Friday for the brutal killing of Lakhbir Singh. He was produced before a Sonipat court on Saturday and remanded in police custody for seven days.

Hours later, Narain Singh was arrested by the Amritsar Rural police at Amarkot village in Amritsar district, police had said. He was brought to Sonipat by the Haryana Police early Sunday.

Narain Singh while talking to the media before his arrest in Amritsar, was unrepentant and said that Lakhbir Singh had been "punished for sacrilege". According to the Sonipat police earlier, Sarabjit Singh claimed that a few more people were involved in the killing.

The case has sparked outrage and triggered calls for action to clear the protest sites on Delhi’s borders where farmers have been camping since last November to press for the scrapping of the Centre’s three agri laws.

The Samyukt Kisan Morcha had, however, issued a statement on Friday distancing itself from the incident and said that it wanted to make it clear that "both the parties to the incident", the Nihang group and the victim, have no relation with the Morcha.

Farmer union leaders asserted on Saturday that the incident will have no impact on the agitation and said they will upgrade security by installing CCTV cameras and increasing the number of volunteers at the protest sites.

The body of Lakhbir Singh was found on Friday tied to a barricade at the Singhu border with a hand chopped off and multiple wounds caused by sharp-edged weapons.

Hours after the crime, Sarabjit Sigh, wearing the blue robes of the Nihang order, claimed that he had "punished" the victim for "desecrating" a Sikh holy book.