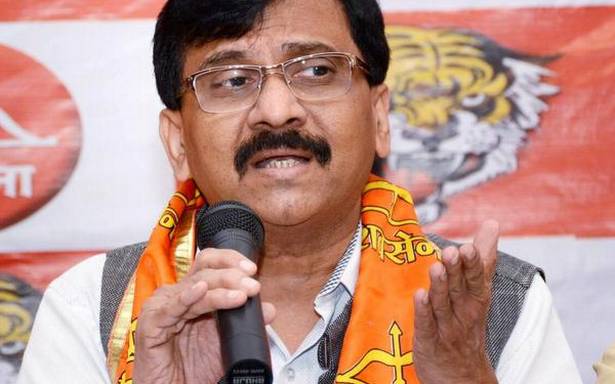 Shiv Sena MP Sanjay Raut on Monday said the situation in Jammu and Kashmir was getting out of hand with the surge in civilian killings and demanded a clarification from Union Home Minister Amit Shah and Defence Minister Rajnath Singh on the matter.

Mr. Raut said the Centre’s mere deployment of threatening rhetoric or surgical strikes against Pakistan would not resolve the tangled situation in Kashmir.

“It is high time the Centre spoke on what was happening in Kashmir rather than giving us a load of hot air on whether or not India should play cricket with Pakistan … Rashtriya Swayamsevak Sangh [RSS chief] Mohan Bhagwat [in his Dasara speech last week] has spoken a burning truth that even despite the scuppering of Article 370, there has been no improvement in the situation in Kashmir…terrorists storm homes and schools with impunity and fire at will in public spaces. This situation will not stop by issuing mere threats to Pakistan,” the Sena leader said.

Noting that at least 17 people had been killed by terrorists in the last 10 days or so in the Valley, Mr. Raut warned that the Centre would have to bear responsibility for failing to prevent the spiral of violence in Kashmir.

“Sometimes Sikhs are targeted, sometimes Kashmiri Pandits are killed… recently, two labourers from Bihar were killed… conducting surgical strikes against Pakistan will not resolve anything. Talking about such strikes, why does the Centre not conduct the same against China which has entered Ladakh?” he said, demanding that the Home Minister and the Defence Minister come clean with what was actually going on in Kashmir.

The Sena MP said that for all the Centre’s claims about the situation being under control in the Valley since the scrapping of Article 370, one never knew what exactly had been the scene there owing to the press clampdown and suspension of Internet services.

“Moreover, there were severe restrictions on people’s movements while Kashmiri leaders were in detention… Hence, many things never came out. While the removal of Article 370 was a positive step and the Sena had supported the Centre at the time, we want to know what is the Centre doing now to control the violence which seems to be getting out of hand,” Mr. Raut said.

He further said that the Centre could not shift the blame for its failures on the opposition parties.

Taking potshots at the BJP regime, Mr. Raut remarked that instead of harassing the tripartite Maha Vikas Aghadi (MVA) government of the Sena, the NCP and the Congress by unleashing the Enforcement Directorate (ED), the Central Bureau of Investigation (CBI), and the Income Tax on the MVA leadership, the Centre would do well to put these agencies to good use in Jammu and Kashmir.

“I exhort all my colleagues in the MVA to not merely sit on their chairs but offer fitting ripostes to every allegation made by the BJP leaders in the State and the Centre,” Mr. Raut said.

In an editorial in the party’s mouthpiece Saamana (where Mr. Raut is executive editor) on Monday, the Sena had chastised former Chief Minister and BJP Leader of the Opposition Devendra Fadnavis for daring to question how Uddhav Thackeray became Chief Minister.

The editorial said that Mr. Thackeray had taken the Chief Minister’s oath “in full public view” unlike Mr. Fadnavis’ secretive, early-morning oath taking ceremony as Chief Minister (along with NCP leader Ajit Pawar) for a very brief while soon after the 2019 Assembly election result.