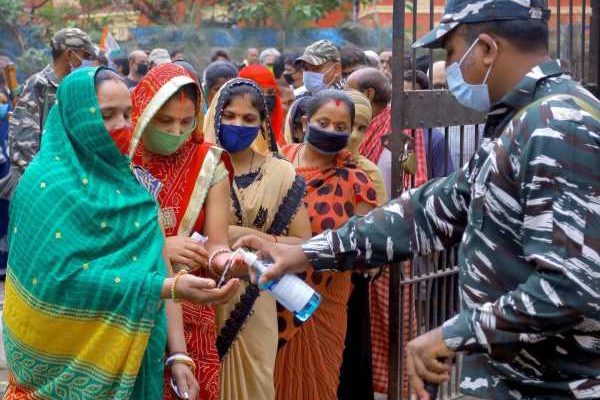 Since smaller parties principally cater to a particular caste or sub-caste, especially among the Dalits, minorities or backward communities, they have an intrinsic potential to wean away a section of voters from the bigger outfits, reports Virendra Singh Rawat.

The rules for the WWE Royal Rumble are simple, and the stakes are high: The match starts with two wrestlers in the ring, with another of (usually) 30 competitors entering every 90 seconds. Everyone tries to toss each other over the top rope and out of the ring. Tossing someone out of the ring over the top rope can be trickier than it sounds, especially when dealing with supersized superstars.

But a radically diverse political landscape notwithstanding, the Royal Rumble template is all set to play out in Uttar Pradesh in the 2022 assembly polls. A number of smaller parties are warming up for the UP elections, consequently joining the league of main contenders, namely the Samajwadi Party, the Congress, and the Bahujan Samaj Party, in quest of victory.

These smaller outfits of all hues and ideological moorings have already started their groundwork for the big battle ahead, with 403 UP assembly seats on the block.

However, two smaller parties, namely Apna Dal-Sonelal of Union minister Anupriya Patel and Nishad Party of Sanjay Nishad, have a truck with the ruling Bharatiya Janata Party in UP.

Against the backdrop of the ongoing farm protests, back into public consciousness in the aftermath of the recent Lakhimpur Kheri episode in which at least four farmers were allegedly mowed down by the son of Union Minister of State for Home Ajay Mishra, smaller parties are expected to not only enliven the election theatre, but also queer the pitch for the Opposition.

Since smaller parties principally cater to a particular caste or sub-caste, especially among the Dalits, minorities or backward communities, they have an intrinsic potential to wean away a section of voters from the bigger outfits. This matrix could either harm the prospects of the ruling dispensation or the Opposition parties at the hustings.

Since the BJP will understandably pull no punches to retain power in UP, the saffron party will play to the gallery and try to coax the smaller players to directly or indirectly align with its agenda. This could further blight the poll maths of the Opposition camp.

For example, the BJP has successfully brought the Nishad Party under its wing, and recently facilitated the entry of Sanjay Nishad into the Vidhan Parishad. He is expected to help the saffron party by acting as a counterweight to the SBSP in Eastern UP districts during the elections.

Interestingly, SBSP was earlier a BJP ally. However, the equation soured after Rajbhar, who was a minister in the Yogi Adityanath Cabinet, was sacked over his sustained diatribe and persistent demand for a larger share in the state government.

Meanwhile, senior UP BJP leader Chandra Mohan said the Adityanath government had dexterously delivered on all fronts and was working tirelessly for the welfare of the people. As such the party did not face any challenge whatsoever from the smaller outfits in the coming elections.

“In a democracy, all parties have a right to contest polls. However, the electorate of UP have time and again reposed faith in the Adityanath government, and the 2022 assembly polls will be no different. The new parties certainly pose a challenge to the Opposition parties, not the BJP,” observed Mohan.

The political pundits also believe that the glut of political outfits will only divide the Opposition votes and puzzle the electorate as polling phases draw closer. Ultimately, this will benefit the ruling party in the state (BJP).

“The propensity of the BJP to gain electorally is directly proportional to the number of political outfits slugging it out. The Opposition will have to forge an alliance if it wishes to defeat the ruling party, but this does not appear to be happening. In fact, the BJP has so far been successful in keeping the Opposition fragmented,” said Suresh Bahadur Singh, a political commentator.

He even claimed the BJP has craftily been giving credence to Congress leader Priyanka Gandhi Vadra in UP to pitch her against the Akhilesh Yadav-led SP since the socialist party has a much stronger cadre base in the state vis-à-vis an insensate Congress in UP.

Meanwhile, senior SP leader and former UP cabinet minister Rajendra Chaudhary claimed the BJP was on its way out in the 2022 assembly elections.

“The people of UP have decisively resolved to dislodge the saffron outfit from power in the next elections and to install the SP government led by Akhilesh Yadav. It does not really matter how many political parties fight the next elections. The SP will lead the tally and form the next government,” claimed Chaudhary.

In all likelihood, the old chestnut of ‘too many cooks spoiling the broth’ will manifest in the UP polls, which will amplify the schism in the Opposition parties lest they band together early to put up a united front against the BJP. Time is of essence here.