It was Soni Somarajan’s biggest dream — to see himself as a proud member of the Indian Armed Forces.
Life brutally shattered that dream.
So, Soni tells Air Commodore Nitin Sathe (retd), he wove new ones.

Years later,
Father still finds new meaning in everything,
and Mother keeps raining on his parade.
There’s a lot about them in me,
these two sides jostling;
my inheritance is an absence of certainty,
silence that takes shape as
poetry.
-Soni Somarajan, from The Black Trunk I I am no poetry fan nor do I understand poetry very well.

But I know Soni Somarajan whom I met at Thiruvananthapuram during the launch of my book, a biography on his school mate, the late Flying Officer M P Anil Kumar, Born to Fly.

Soni was there at the Sainik School Kazhakootam, the venue of the launch, in his wheelchair.

We had a brief interaction over tea with him after the ceremonies.

He was coordinating part of the function as vice president of the Old Boy’s Association. A thoroughbred Malayali, Soni Somarajan at 47, is a poet, copy writer, editor, content consultant and much more.

His poetry has featured in anthologies, magazines and newspapers like Muse India, North East Review, Kitaab, The Bangalore Review, New Indian Express, Marie Claire, The Four Quarters Magazine and The Alipore Post, to name a few.

Rekindling our friendship, which started a few years ago over the phone, I requested him for a copy of his book to try reading poetry.

And the moment I got myself a copy, I dived into it and read end-to-end.

The poetry was stunning and left me mesmerised.

If he could get the un-initiated to be impressed, I for one believed that we had a bestseller in the making!

I decided to chat up with the man himself to find out what it takes to be a poet. I ask him to give me a brief on his early life.

“From a simple village life to a school in the city, with boys from all over the country, was a huge change.

“This multi-cultural, multilingual and multi-ethnic cauldron that we were churned in made us fit enough to adjust to all the vagaries of life.

“Then, there were our teachers — all of them were par excellence.

“I for one was very fond of my English teacher, Prem C Nair, who also was my housemaster; tough on the outside and soft inside.”

Soni was born into an Air Warrior family in 1974.

It was at the AFA that he was able to see the small silver Kiran trainer airplanes and speak to his father’s friends on the tarmac.

“It was here that I was introduced to reading by my father,” remembers Soni. “AFA had a splendid library and I was barely 11 when I had polished through a few classics.”

Before long, he was packed off to the military boarding school at Kazhakootam, north of Thiruvananthapuram, with the aim of joining the Indian defence forces one day.

A good portion of First Contact is dedicated to the beautiful memories of the Indian Air Force.

“Those were such happy times,” he remembers. “Life in school was like living in a cosmopolitan culture.

“PT, parade, games and studies kept us busy and, since it was a military preparatory school, discipline was thrust upon us at an early age.

“But we did do an occasional bunk to see a late-night show at the nearest theatre in town.

“The punishments that we got when caught I still remember!” says Soni.

One of Soni’s friends told me that he had a unique way of bunking classes he didn’t want to attend. “After asking permission from the teacher to leave the class to get something that he had forgotten in the school auditorium, he would disappear for the entire duration of the class!”

“A whole generation of students from my school have been inspired by MP’s story,” Soni continues.

“Although I never met MP, his story is of grit, determination and perseverance against the worst odds.

“I took inspiration from that fact and also that MP faced much odds greater than mine; if he could do it, so could I.

“I could then make a success story of my life with this motivation.” 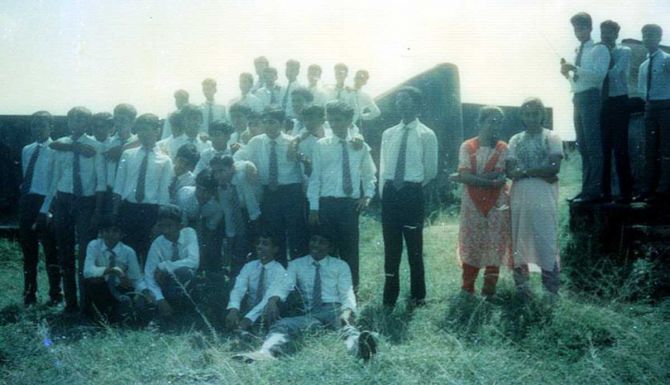 “Why not a poem to remember the inspiration?” I ask him.

“Oh yes, my next set of poems will surely have MP as the protagonist. There are so many aspects of my life I have left unaddressed in this book,” he says.

Little did the young lad know that his life was going to take a U-turn soon after school.

It was in the final year of school that Soni started feeling weakness in his legs and arms.

He was the goalkeeper of the school hockey team, playing in a championship, when things got worse.

His friends noticed that he had developed a limp too.

He passed out of school, avoiding physicals as much as possible.

Things worsened and he was forced to pay a visit to a local doctor, who said he could be suffering from muscular dystrophy and needed some tests done at a bigger hospital.

He gave up the idea of joining the Armed Forces since he was sure of not clearing the strict medical tests that he would be subjected to.

Instead, he graduated in hotel management and picked up a job as an HR trainer at a five-star hotel.

But his physical condition worsened and he had to quit the job in 1997.

This forced him to return home and he looked after his family’s consumer electronics business for the next few years, whilst he thought of what to do with his new life in a wheelchair.

While he was helping his friend out in the tourism business, he sensed an opportunity to get into the creative field.

He became a small-time writer and content specialist and soon launched his own business.

First Contact has been written in four sections and is actually an anthology of the four-and-a-half decades of Soni’s life.

The parts which deal with school and early life appear to be happy; the poetry gets melancholic as he discusses his trials and tribulations in the wheelchair.

It is but natural that the most difficult period of his life has been about being differently abled.

Having written and interacted with many wheel-chair bound people, I can well understand how life must have changed for him in the last 15 years. “When God closes one door, a thousand new ones open. Why not be positive with what life gives you?” I ask him.

“I think I am the reticent and shy type; I won’t be able to talk about my life in prose.

“I chose to hide behind the nebulous nature of poetry and am comfortable in telling my life story in this manner.

“So, I am there and not there at the same time in front of you.

“And before you have understood what I mean, I am telling you another story!

“As every day passes, we lose one day of our earliest memories. And, with each passing day, we add colour to our memory; trying to remember our past by adding some detail, fictitious or not, to it keeps it interesting!”

He goes on to tell me that even if his poetry may sound sad at some places, it is meant for people to see the positive side of things and learn to take the “downs” of life in a better manner.

“Poetry is my catharsis; I speak out and it makes me lighter… and hopefully spreads the message of optimism amongst the readers.”

“I have heard that your poetry has the depth and multiple hidden meanings like Gulzar! One of your fans says this, not I,” I say with a smile.

He laughs it off.

“I am a rookie and learning every day… but I definitely aspire to write as beautifully as that man!”

What about a message to your present fans and potential fans?

“Do you know about Jalaluddin Rumi? He was a 13th century Persian poet and scholar.

“I would advise all to carry a book of his writings called The Essential Rumi.

“You read any page of his poetry in any situation that you are in and there will be a lesson for you there!

“I simply love his work and he is the one who inspires me to write.” “Who and what else is inspiration?

“My family, of course, for allowing me to live away from them and follow my dreams.

“My caretaker — the lady who has been looking after me for 15 years. She ensures that I am comfortable at all times.

“And, most importantly, my friends from school, college and life who have been extremely supportive through my hard times.

“The bonding and bonhomie that I share with my friends is fantastic. I don’t know where I would be without their support!

“Despite a lack of normalcy, I have learnt to look differently at life.

“My experiences have been difficult and some parts sad, but I have been empowered by all the support of my friends and family and this comes out clearly in my poetry.”

As all children do, Soni had approached his housemaster to write something in his autograph book while leaving school.

Prem C Nair sir wrote, ‘Maintain and enhance your interest in this great language; it will pay you dividends one day!’

I ask Soni to read out one of his poems before we said goodbye. 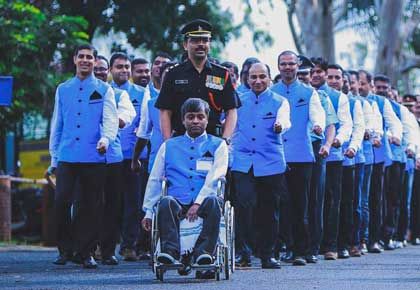