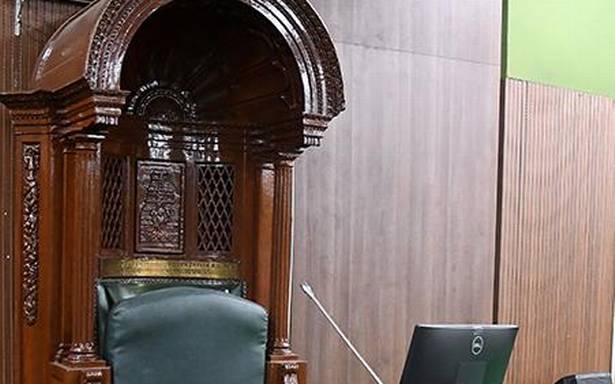 It was presented by Lord Willingdon on March 6, 1922

The historic Chair of the Speaker of the Tamil Nadu Assembly is set to turn 100 in the next few months. The Assembly Secretariat has been painstakingly maintaining the seat of historical importance for over 99 years now.

The artistic Chair, presented by His Excellency Lord Willingdon, the then Governor of Madras Presidency, and his wife Lady Willingdon to the then President of the Madras Legislative Council on March 6, 1922, as a personal gift, has been witness to the democratic traditions of the erstwhile Madras Presidency, the Legislative Assembly of the Madras State since Independence and eventually that of Tamil Nadu. “It is made of teak wood. It is sturdy and has not needed any major repair,” says an official.

The Chair has been taken out of the Fort St. George campus in Chennai multiple times when the Assembly held its sessions elsewhere. It has been taken to Senate Hall in the University of Madras in Chepauk, Rajaji Hall in Omandurar Government Estate, old Kalaivanar Arangam on Wallajah Road and a palace in Udhagamandalam. Since 2020, it has been housed in the new Kalaivanar Arangam. “Before an Assembly session, the Chair is given a fresh coat of varnish. The cushion is regularly replaced. The ‘secret chambers’ are cleaned,” a senior official says.

Besides the Speaker, constitutional authorities above the Speaker have occupied the Chair.

The Governor is offered the Chair every time he visits the House to deliver his address during the first session in a year. The highest dignitary to have occupied the Chair is the President of India. There have also been some controversial incidents — once, a Chief Minister sat on it with the consent of the Speaker during a function. Opposition MLAs, too, have unauthorisedly occupied it.