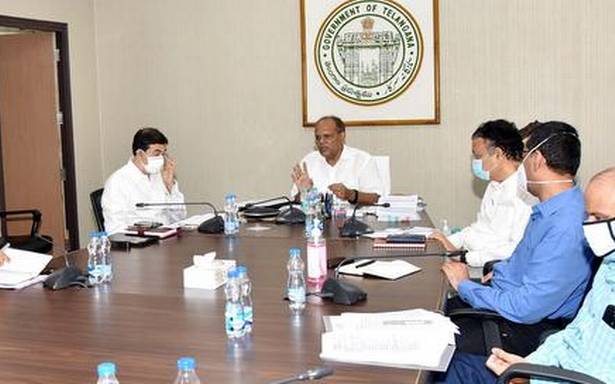 The State government has asked the District Collectors to hand over the land to Telangana State Industrial Infrastructure Corporation (TSIIC) for establishing food processing zones, new medical and nursing colleges.

Chief Secretary Somesh Kumar held a video conference with District Collectors and other officials concerned from Hyderabad on Saturday on the construction of integrated collectorate complexes and handover of lands to new medical and nursing colleges and food processing zones being planned by the government.

Asking the officials to complete the integrated collectorate complexes in 12 districts within a week and keep them ready for inauguration, the Chief Secretary asked the District Collectors to complete the buildings in the remaining districts at the earliest.

The Chief Secretary directed the District Collectors to initiate the process for handing over lands to TSIIC for taking up special food processing zones and also told them to complete the formalities to hand over the lands identified for new medical and nursing colleges sanctioned to seven districts recently.

He also reviewed the progress of disposal of pending mutations, applications filed under grievances on land matters and prohibited properties in Dharani and instructed the authorities to complete all pending issues by June 9 so that eligible farmers got the benefit of Rythu Bandhu (investment support scheme). He also wanted the officials to complete hearings of pending cases in special tribunals.