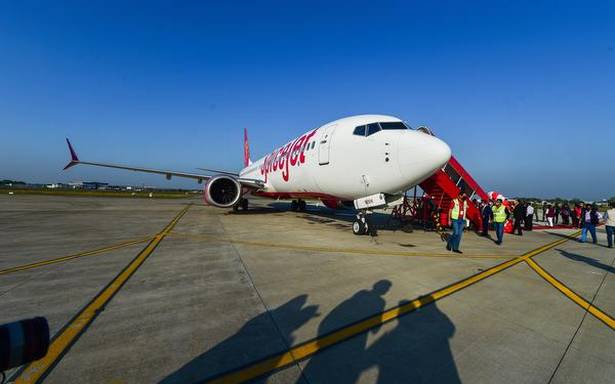 Air carrier SpiceJet Limited has preferred an appeal before a Division Bench of the Madras High Court challenging a single judge’s December 6 order to wind up the company for non-payment of over $24 million to a Swiss company which maintains, repairs and overhauls aircraft engines, and components.

Justices Paresh Upadhyay and Sathi Kumar Sukumara Kurup were, on Wednesday, informed by senior counsel V. Ramakrishnan, representing SpiceJet, that the company had complied with the single judge’s direction to deposit an amount equivalent to $5 million in court to stay his order and enable the air carrier to go on appeal.

After recording his submission and hearing preliminary arguments advanced by him as well as advocate Rahul Balaji representing Credit Suisse AG, a Zurich-based stock corporation which had been assigned the right to receive the payments due to SR Technics, the judges adjourned the matter to Thursday for further hearing.

In his submissions, Mr. Ramakrishnan said, the air carrier had entered into an agreement with the Swiss company for a period of 10 years in 2011. However, midway, it discovered that the aircraft maintenance company did not have a valid authorisation from the Director General of Civil Aviation between January 1, 2009 and May 18, 2015.

“This was something horrendous, shocking and very, very serious and so we stopped paying,” the senior counsel said and argued that the single judge had committed two errors. First the single judge had assumed that SpiceJet had entered into the agreement despite knowing about the absence of DGCA approval. Such an assumption was based on arbitral proceedings that were held between the two companies in London. Secondly, the judge had wondered why SpiceJet didn’t terminate the agreement with the Swiss company even if it could be assumed that it came to know about the failure to obtain DGCA approval only midway.

“This is like asking why I didn’t divorce my wife, why I stayed with her. Termination is not a mandatory requirement. We were not aware of non approval. Once we became aware, we stopped payment. There’s no finding in the arbitral award that we were aware of the non approval even before entering into the agreement,” the counsel said.

He also argued that an “illegal claim” for dues would not fall under the definition of ‘debts’ under the Companies Act and thereby call for passing an order to wind up the company.

On the other hand, Mr. Balaji said, SpiceJet could not deny the existence of invoices and certificates of acceptance too. “Their (SpiceJet’s) argument is like a wine which they think will improve with age. Not a single document was issued to me by them during the agreement period stating that I am not authorised and so they will not pay me,” he said.