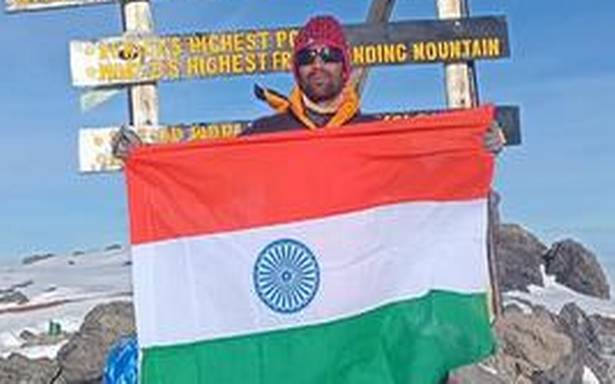 Nagaraju achives the feat after six days of tough journey

A 22-year-old youngster of Srikakulam district successfully climbed Mount Kilimanjaro in Tanzania in spite of facing many financial hurdles and other problems. The youngster, Merugula Nagaraju, a native of Vunukuru village of Regidi Amadalavalasa mandal, was felicitated on Friday by voluntary organisation, Indian Army Calling, founder and director Basava Venkata Ramana in Srikakulam.

Mr.Nagaraju, who completed Physical Education Training Course, climbed Kilimanjaro (5,895 metres height), topographically fourth prominent peak in the world, on November 28 after six days of tough journey. “Mountaineering is an expensive venture. Fortunately, I could generate ₹3 lakh with the support of local public representatives, teachers and others. With their continuous support, I will strive to prove my talent by climbing Mount Everest (8,849 metres), the highest mountain above the sea level,” said Mr.Nagaraju.

Mr.Venkata Ramana assured to provide special training to him to achieve the goal. He urged the government to allocate funds for persons who were interested in mountaineering since it would inspire others and bring laurels to Srikakulam district.