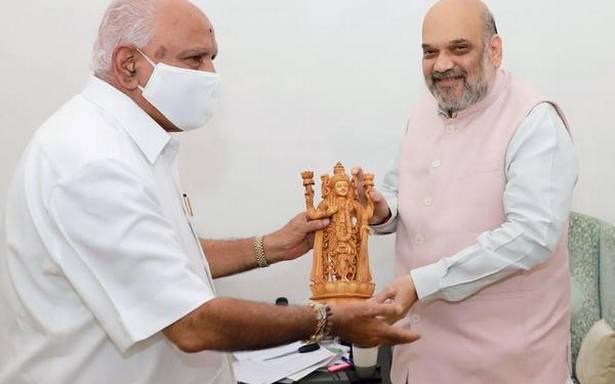 As soon as he returned from Delhi after meeting central party leaders, Chief Minister B.S. Yediyurappa announced that a BJP Legislature Party meeting would be convened on July 26, the day he completes two years in office. This has now set the stage for dissidents for a show of strength and to air their grievances.

Amid intense speculation about a leadership change after two years of the veteran leader’s tenure in the State, the meeting being scheduled on the second anniversary seems to have only raised the stakes further.

Announcing the meeting after he landed in Bengaluru following his two-day visit to Delhi, during which there were reports that he had offered to resign, Mr. Yediyurappa sought to paint a picture of being in control. He said the party high command had tasked him with ensuring a BJP victory in both the 2023 Assembly and 2024 Lok Sabha polls. “So, to take everyone along on this endeavour I have convened our legislature party meeting on July 26,” he said. He also said that he would be visiting Delhi again in the first week of August.

However, according to sources, the Chief Minister had been resisting the demand for a legislature party meeting made by dissidents for over two months now, fearing that it could turn into a platform for a show of strength from them.

“Given how he announced the legislature party meeting after he met party president J.P. Nadda and Amit Shah, it is evident that the high command has directed him to convene it. We will discuss all our issues threadbare at the meeting, including the demand for leadership change,” said a senior dissident leader of the party, indicating that it would be a stormy affair.

Sources close to Chief Minister B.S. Yediyurappa, while maintaining that he would continue as Chief Minister and that the high command had not asked him to resign, said he was “unhappy with the lack of demonstration of confidence” in him.

“There was no talk of leadership change, but Mr. Yediyurappa expressed displeasure over the high command not putting a stop to everyday speculation of a leadership change in Karnataka. As media the speculated about his resignation on Saturday, he was left alone to defend himself and no one from the high command clarified on the matter. This not only weakens his standing, but also that of the government and the party in the State,” a leader close to him said.

Meanwhile, the silence of the high command was read as a tacit support to their demands by the dissidents.