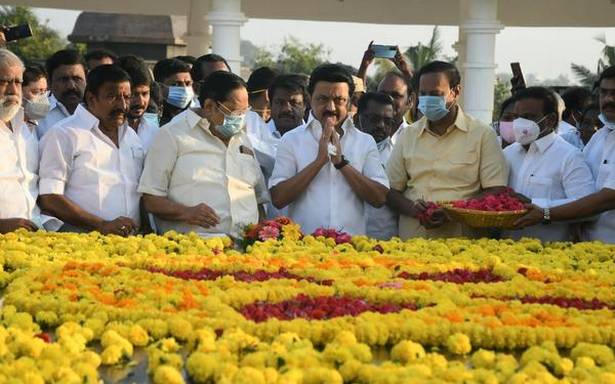 DMK president M.K. Stalin on Monday said he would release a 10-year vision statement for Tamil Nadu at the party conference in Tiruchi on March 7.

Addressing the media on the occasion of his birthday in Chennai, Mr Stalin said the vision statement had been drafted to secure a first place for Tamil Nadu in all sectors in the next 10 years. “I have defined the goals to be achieved in 10 years in every sector,” he said.

Mr. Stalin said he and his party leaders had already launched the campaign for the election and are holding talks with leaders of the alliance partners for seat-sharing. “We are also preparing the election manifesto,” he said.

Asked about Union Home Minister Amist Shah’s assertion that the AIADMK-BJP alliance was functioning like a double engine, Mr. Stalin said the DMK was not bothered about such claims. “He held the hands of Chief Minister Edappadi K. Palaniswami and Deputy Chief Minister O. Panneerselvam who have indulged in corruption, commission and collection. People in the country know who is standing by corrupt leaders,” he charged.

Mr. Stalin said the DMK’s manifesto would come up with plans to overcome the debt faced by the State.