For, one refusal might just turn a Bollywood cliche into a frightening reality in someone’s life. After all, ‘Kumbh ke mele mai bichar jana’, or getting lost in a gathering thronged by lakhs everyday, is a real possibility, even in the age of cell phones. 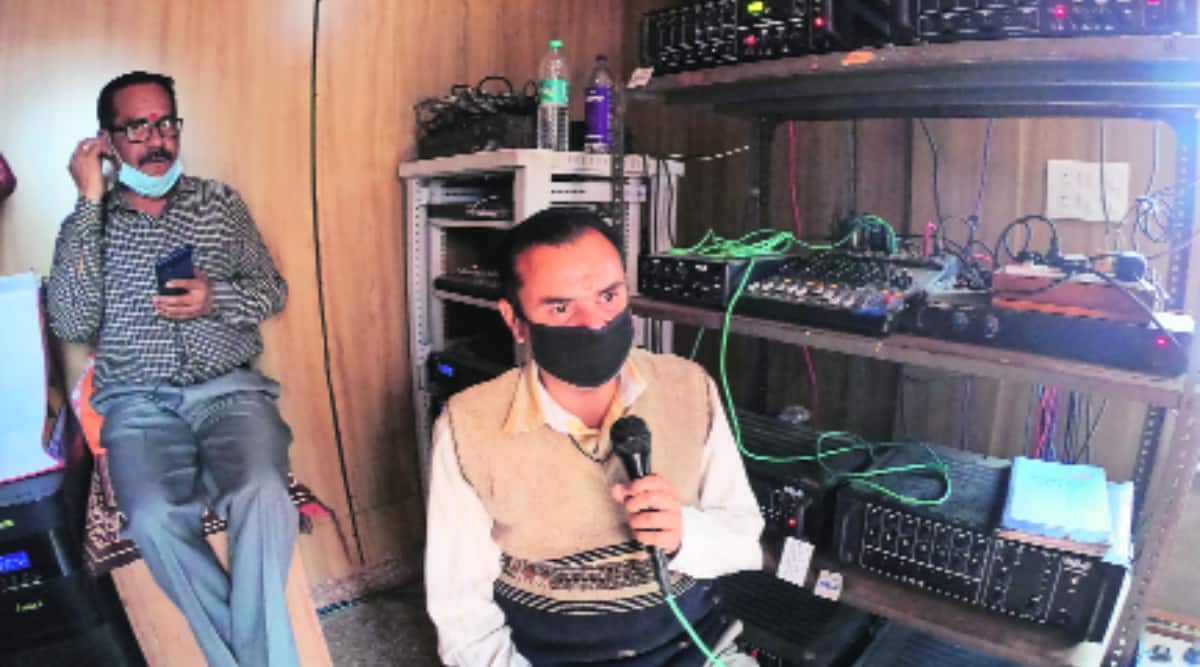 Over the years, Neeraj Sharma has mastered the art of reading faces. He knows not every pale face is in distress and the seemingly panic-struck person might just be playing a trick.

But he can ill-afford any indiscretion. So no one entering his 6×6 booth for the lost-and-found at the Maha Kumbh is turned away.

He puts people at ease, takes quick notes and speaks into a microphone, connected with tannoys across the gathering.

For, one refusal might just turn a Bollywood cliche into a frightening reality in someone’s life. After all, ‘Kumbh ke mele mai bichar jana’, or getting lost in a gathering thronged by lakhs everyday, is a real possibility, even in the age of cell phones.

And the numbers are illustrative. According to Deputy SP, Kumbh, (communications) Vipin Kumar, over 90 people turned up with missing complaints within a few hours on Thursday.

At the booth of Ganga Seva, a non-government platform of which Sharma is a member, is a register where a list of the major missing cases is maintained. The pages are filling up fast, with over 200 complaints in less than 10 days.

If all cases are entered, the register will fill up in less than a day, Sharma says, adding that most cases are resolved within a few hours.

Even as Sharma spoke, three persons with separate complaints turned up — a senior citizen looking for his son, a middle-aged government employee struggling to locate his brother-in-law and a youth saying he has strayed from his group.

“Very few remain pending, largely due to the mechanism in place as part of which every announcement, including by Ganga Seva, is noted down, all police stations are activated, and alerts are sent over the wireless,” Kumar said.

The administration has linked the tannoys maintained by the police and the Ganga Seva, which has its head office near the Har ki Pauri ghat, for seamless coordination.

At the booth, which operates round the clock, the announcers work in three shifts. “There are cases when youngsters take turns in making false announcements to get their voices recorded and circulate it among friends for fun. There are times it is obvious but we cannot afford to turn anyone away,” Sharma said.

Across the area, the police operationalised an AI-based surveillance system on Thursday, as part of which 310 high-resolution CCTVs have been activated and the footage is being monitored from a central command centre at the office of the mela authority.

A senior police officer said the system ought to have been activated before Maha Shivratri, when the first shahi snaan took place with over 28 lakh devotees turning up.

The crowd thinned considerably on Thursday, with many who had turned up for the shahi snaan heading out of Haridwar. The administration is now gearing up to tackle the surge in numbers in April when multiple rounds of shahi snaans are scheduled.
Back at the Ganga Seva booth, Chandrabhan Prasad from Haryana, who arrived at Kumbh with his son and nephew on Tuesday, is a bundle of nerves.