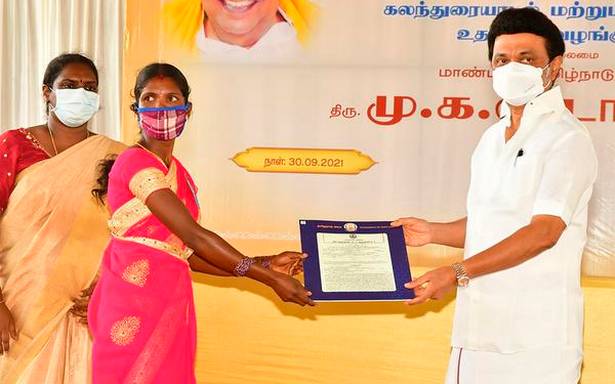 ‘Women found it difficult to get funds in the past regime’

The DMK government has revived schemes for women self-help groups, whereas women found it difficult to get funds in the past regime, Chief Minister M.K. Stalin said on Thursday.

Addressing villagers at Vathalmalai here, he said the SHG scheme was launched in Dharmapuri by former Chief Minister M. Karunanidhi for women to lead a life of self-respect and independence. He alleged that SHG members could not visit banks or get funds in the past 10 years. The DMK had fulfilled 202 of its 505 election promises, and the rest would be implemented in phases.

In an interaction with the tribal villagers at Vathalmalai, the Chief Minister said the chairman and members would soon be appointed to the Commission for Adi Dravidar and Tribal Welfare. Mr. Stalin, who is said to be the first Chief Minister to visit the tribal village, distributed welfare assistance to villagers. Measures would be taken to meet the basic necessities of the region, he said.

Youth in the village petitioned the Chief Minister for more reservation in employment for the Scheduled Tribes.

He felicitated the village panchayats that achieved 100% vaccination. Minister for Health and Family Welfare Ma. Subramanian and other senior officials were present.