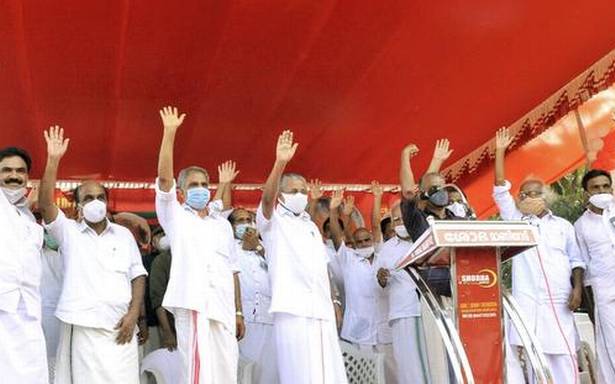 Chief Minister Pinarayi Vijayan has said that the Citizenship (Amendment) Act (CAA) will not be implemented in the State.

At the inauguration of the Vikasana Munnetta Yatra, led by Left Democratic Front (LDF) convener and CPI(M) acting State secretary A. Vijayaraghavan at Uppala here on Saturday, he vehemently criticised Union Home Minister Amit Shah’s statement that the Act would be implemented after the COVID-19 vaccination drive.

“Some might wonder how a State can refuse to enforce a Central law. However, it has already been clarified that it will not be implemented in Kerala,” the Chief Minister said. Some were trying to divert attention to communalism, sidelining developmental issues. “This does not augur well for the country,” he added.

The stance adopted by organisations such as the Social Democratic Party of India (SDPI) and the Jamaat-e-Islami to counter communalism fostered by the Rashtriya Swayamsevak Sangh (RSS) was suicidal. “Instead of confronting communal forces on their own for the protection of minorities, they need to join the fight taken up by the LDF,” he said. The LDF had an uncompromising attitude towards communalism. “The same cannot be said of the Congress. Its stance is similar to that of the BJP’s.”

Mr. Vijayan said Keralites wanted the LDF’s rule to continue and they believed that only the Left could strengthen Kerala.

‘For the common man’

On the occasion, Mr. Vijayaraghavan said the LDF government presented the most noteworthy development model in the country. “While the Union government is working for billionaires, the government here has not diluted its commitment to the common man,” he said.

Even when COVID-19 was raging globally, the State could instil confidence in the people. Kerala witnessed all-round development under the LDF rule. “But the United Democratic Front (UDF) and the BJP are bent on spreading lies against the government.”