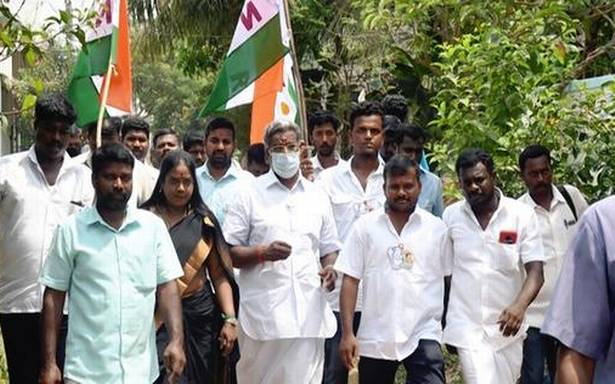 Former Minister and AINRC leader P. Rajavelu on Sunday asserted that there was no dilution in the demand for Statehood.

“Our leader (Mr. Rangasamy) will make the final statement on the issue but as far we (workers) know, demanding Statehood is our stated policy. There is no dilution on the issue,” he said responding to a query on alliance partner BJP’s silence in the manifesto on Statehood.

Mr. Rajevelu, who is contesting from the reserved Nettapakkam constituency, said the AINRC would have a separate manifesto. “Our leader will make an announcement on the issue. The Congress is now making false claims and crying crocodile tears on Statehood. When we were in government, the party took several initiatives but the Congress party never supported us. Now, in the last minute they are showing interest in getting Statehood,” he said.

The Congress had “failed” to provide basic amenities to the people in the Union Territory. “Nettapakkam is one of the backward constituencies, lacking in proper infrastructure including roads and public transport system. The Congress party failed to deliver on any of its electoral promises. It was fighting with Centre and Lt. Governor during its tenure,” he added. The AINRC would revive growth and provide good governance, taking the welfare of the people into consideration.