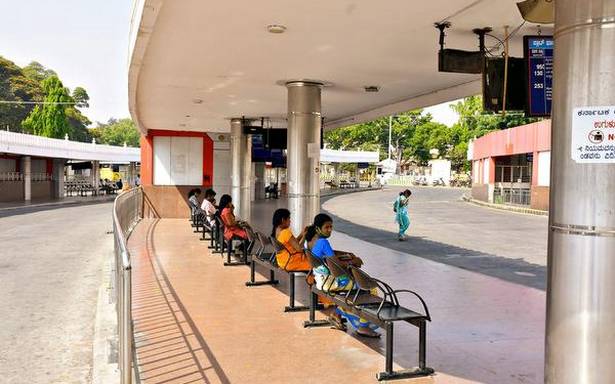 The indefinite strike by the employees of Karnataka State Road Transport Corporation (KSRTC) that began here on Wednesday was total as none of the buses operated by the two divisions (urban and rural) hit the road.

Nearly 545 buses belonging to the rural division and about 450-500 buses of the urban division stayed put in the depots.

Private buses and other private transport vehicles came to the rescue of passengers as they ferried them to their destinations early this morning from the KSRTC’s mofussil bus terminus. The private bus operators were authorised to operate on several routes, including Bengaluru, Madikeri and Hassan, to deal with the inconvenience caused to passengers and ease the situation though not fully.

Unlike the previous strike, the Transport Department appeared to have been prepared fully to handle the situation as the Regional Transport Offices (RTOs) had talks with the private operators in advance and arranged alternative modes of transport.

Besides private buses, mini-buses and tourist vehicles were also operated. However, there were no services on long-distance routes. The services of the RTCs of Kerala and Tamil Nadu on certain routes came in handy.

However, the intra-city operations were badly hit with nearly 450-500 buses operated on the routes across Mysuru keeping off the road. The city bus-stand was wearing a deserted look. The local commuters picked auto-rickshaws and taxis to reach their destinations.

Not all were aware of the strike as many were found waiting for buses in the early hours of Wednesday at the mofussil bus terminus.

Unable to get buses, the passengers were expressing their ire at the corporation for causing hardship to the public at a time when the State was in the grip of COVID-19 crisis.

Sources in the KSRTC here said employees did not report to their respective depots with all of them joining the strike unmindful of the government’s appeal to reconsider their decision in view of COVID-19 crisis.

From the Mysuru rural division, nearly 5,000 trips operated daily, with over 1,000 trips to Bengaluru alone, had to be cancelled.

“Services normally start daily from 4 a.m. but we could not operate even one bus as no driver and conductor reported for duty,” a senior KSRTC official said.

Many police personnel had been deployed at the bus terminus to deal with any untoward incidents triggering from the strike.

KSRTC Divisional Controller (Rural division) K.H. Srinivas told The Hindu that the alternative transport arrangements made by the RTOs will continue from the mofussil bus terminus.

In Kodagu, Chamarajanagar and Mandya, private operators pitched in to ferry commuters with the district administrations permitting their operations on several routes.