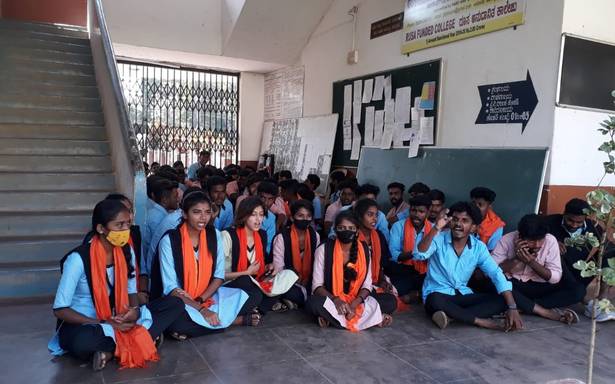 A protest by a group of students seeking permission to attend classes wearing saffron shawls prompted the principal of Government First Grade College at Koppa in Chikkamagaluru district to suspend the dress code up to January 10. Prof. S. Anantha, the principal, has convened a parents’ meeting on January 10 to decide on a dress code for students.

The college has a total strength of 850 students. Around 50 students staged a protest on January 4 demanding that they be allowed to wear saffron shawls while attending classes, as Muslim girls had been allowed to cover their heads with a scarf.

“We have different dress codes, given the various courses offered in the college. However, a few students have objected to the scarf worn by some girls. They are demanding permission to wear saffron shawls. When the issue was raised three years ago, a decision was taken in a parents’ meeting that Muslim girls could cover their heads with a scarf. Now, new students have joined the college. They are raising the issue again,” said Mr. Anantha.

In order to resolve the issue, the principal has suspended the dress code until the next parents’ meeting. “Let them wear whatever they want up to January 10. We will hold the meeting under the chairmanship of MLA T.D. Raje Gowda, who is also chairman of the College Development Committee. We have invited parents and people’s representatives to the meeting,” he added.