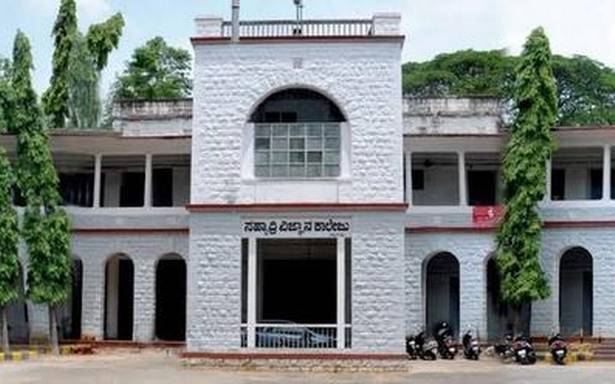 Hundreds of old students of Shivamogga’s Sahyadri College, the oldest in the city and set up before Independence, have opposed the proposal to set up a special training centre for sports on the college campus. They have urged the university not to give up its land for the project.

Kiren Rijiju, Union Minister for Youth Affairs and Sports, during his visit to Shivamogga in February this year, had announced that a special sports training centre with advanced infrastructure would be set up in the city under Khelo India, a Union government-sponsored project.

Following his assurance, the district administration held a meeting under the chairmanship of K.S. Eshwarappa, Minister in charge of the district, and decided to propose the Sahyadri College campus for the project. Lok Sabha member B.Y. Raghavendra and others were present at the meeting.

Shivamogga Deputy Commissioner K.B. Shivakumar wrote to Kuvempu University on April 16 requesting the Vice-Chancellor to hand over 18.04 acres of campus land to the Department of Youth Empowerment and Sports so that the training centre could be established. Subsequently, many organisations and former students of the college have raised their voice against this move.

Sahyadri College was set up in 1940 on 100 acres of land, allotted by Jayachamarajendra Wadiyar. Over the years, some portions of the campus have been taken over by several departments to set up offices. At present, the college, under the direct control of Kuvempu University, has a campus spread over 79 acres. It houses three colleges with more than 6,500 students.

B.P. Lohit Kumar, an alumnus of Sahyadri Arts College, said the sports centre should be set up outside the college campus. “The special training centre is a big project. It would require more than 50 acres of land. Initially, they are seeking 18.4 acres. Gradually, the project will extend, occupying more area. We are worried that one day the government might ask the college to vacate the campus,” he said.

The alumni conducted a social media campaign against the land handover on Friday. They maintained that the sports centre would hardly benefit the college students as it would be under the control of different departments. Hundreds of students have sent emails to the Vice-Chancellor appealing to him not to hand over the land.

B.P. Veerabhadrappa, the Vice-Chancellor, held a meeting with the teaching faculty of the three colleges recently on the proposal. Many senior professors also opposed the move.

When The Hindu contacted Prof. Veerabhadrappa, he said the university had not taken a decision yet. “We have held three or four meetings and also written to the State government seeking its opinion. The sports centre is coming up on the collaboration of six agencies working under State and Union governments. It will help the students of the college as well. However, we will make a decision considering all the factors,” he said.