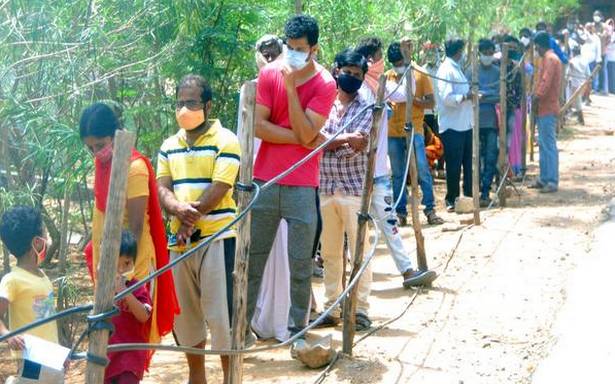 On Sunday, the Sangareddy district registered seven deaths due to COVID-19. However, the bulletin issued by the district authorities claimed that the cumulative number of fatalities due to coronavirus since last year was only 74. The officials repeatedly claimed that there have been no deaths due to coronavirus in the district since beginning of the second wave. The number of deaths in the bulletin continues to be unchanged even when the report from the ground is totally different.

For instance IDA Bollaram Municipal Commissioner Rajendra Kumar informed that a 42-year-old woman died due to complications arising out of COVID-19 at Gandhi Nagar in municipal limits. A 45-year-old man died due to COVID-19 at Gandhi Nagar on the outskirts of Devulapally village in Hatnoor mandal on Sunday, according to doctor in the PHC Shankar Naik. Officials at the field reported that a 32-year-old woman at Nagadhar in Kalher mandal and a 52-year-old man at Chimnapur in Kandi mandal and another person from Manoor also succumbed to COVID-19.

However, these numbers did not figure in the bulletin released by the in-charge District Medical and Health Officer Gayatri Devi on Monday. On their part the officials in the Health department are saying that they are releasing figures provide by State authorities.

According reliable sources, three deaths occurred in the district headquarters hospital due to complications arising out of COVID-19 in the last one week. Further, there are 46 patients undergoing treatment at the government district hospital while the bulletin maintains that there is only one patient. “All of them needed oxygen and we are supplying it and treating them,” Superintendent of the District Hospital Sangareddy told The Hindu.