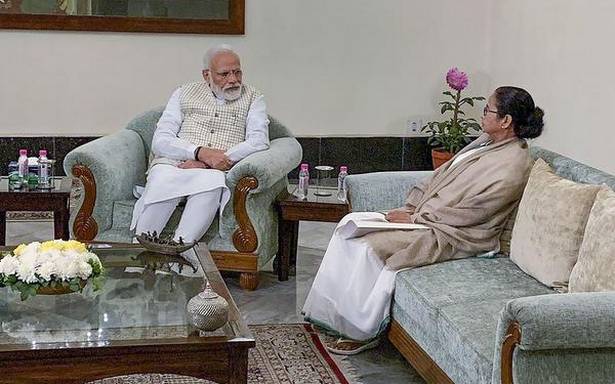 Opposition leaders across the spectrum on Monday claimed that Prime Minister Narendra Modi’s new vaccination policy of providing free vaccines to all adults in government hospitals from June 21 has been driven by the Supreme Court’s criticism of its policy and constant pressure from political rivals.

While several chief ministers of Opposition-ruled States thanked the Prime Minister for ‘reversing’ the Centre’s earlier policy of asking them to buy directly from vaccine producers and offering the vaccines free of cost, several Opposition leaders argued that such a decision should have been taken right at the start of the vaccination programme, pointing out that the delay cost many lives.

West Bengal Chief Minister Mamata Banerjee tweeted, “Back in Feb ’21 & multiple times thereafter, I’d written to the PM stating our long standing demand to provide vaccines to ALL for FREE. Took him 4 months but after much pressure, he has FINALLY listened to us & implemented what we’ve been asking all this while. The well-being of the people of India should’ve been prioritized since the very start of this pandemic. Unfortunately, this delayed decision by PM has already cost many lives”.

Mr. Gehlot also contested Mr Modi’s claim that States had asked for a ‘free-hand’ from the Centre with regard to vaccine procurement.

Addressing a virtual press conference, Congress chief spokesperson Randeep Surjewala said the Prime Minister’s announcement partially met the Congress’ demand for a free universal vaccination and even now, a person may have spend anywhere between ₹1,900 to ₹2,700 for two doses if he is ‘forced’ to get vaccinated at a private hospital because of non-availability of vaccines in a government hospital or opts for a private hospital.

“One simple question — If vaccines are free for all, why should private hospitals charge for them?”asked former Congress chief Rahul Gandhi on twitter with hashtag #FreeVaccineForAll.

“The cost of the delay has been unbearable for India as it resulted in tens of thousands of deaths. There can be no compensation for the human suffering,” added senior Congress leader Anand Sharma.

Questioning the 25% quota of vaccines for private hospitals, CPI(M) General Secretary Sitaram Yechury said, “The vaccination programme is funded by people’s money. So why is the discrimination continuing? This is not a largesse by the Modi government, it is not a favour that they are granting us.”

The ground reality is drastically different from the “bombastic claims” on vaccination made by the Prime Minister, he added.

“The opposition parties, including ours have been demanding universal, free vaccines and free foodgrains for the vulnerable. The government did not listen to the Opposition and then the Supreme Court had to step in,” said CPI general secretary D. Raja, adding, “Vaccination is the government’s responsibility; it is not an act of charity”

RJD MP Manoj Jha pointed out that BJP leaders had held press conferences to “run down the demands made by the Opposition parties but has now been forced to accept them after the Supreme Court’s observation”.

“The Prime Minister made this announcement two weeks after the apex court’s observations. If this is not policy paralysis then what is?” asked Mr. Jha.

Leader of the Opposition in the Rajya Sabha Mallikarjun Kharge also took to Twitter to ask “if Govt has enough doses to vaccinate the most vulnerable people by July as it plans. Where is the blueprint for it?”