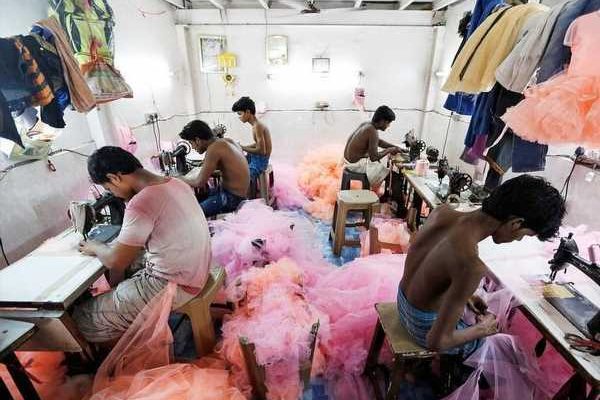 The nearly Rs 70,000 crore synthetic textile industry of Surat, which had come to a standstill during and in the immediate aftermath of the lockdown, is humming once again.

Part II: Production slumps in the powerloom hub of Bhiwandi 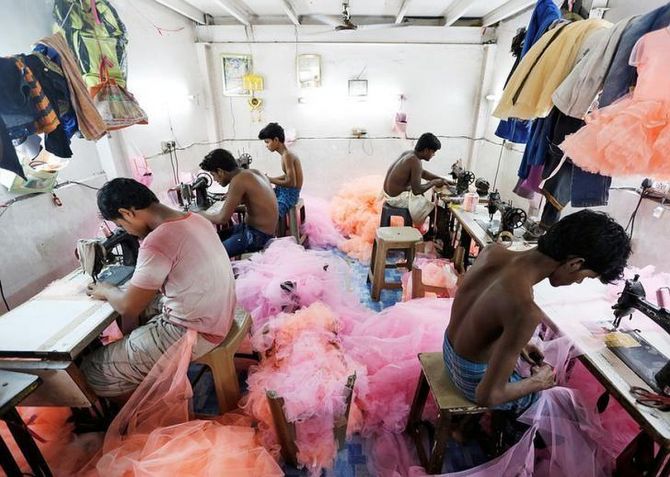 When the lockdown was lifted last year, Rasikbhai Kotadiya, who runs a powerloom unit in the Kim-Pipodara industrial area on the outskirts of Surat, was left with only four workers out of the 48 that he used to employ to run his 128 looms.

Though the economy had been unlocked, his textile unit, and that of thousands of others, struggled to resume operations.

By the last week of May, nearly 700,000 of Surat’s 1.2-1.5 million migrant workers, left high and dry with no pay during the lockdown, had returned home.

In Laskana, another textile weaving hub in Surat, the powerlooms were all but silent, with only 2,000 of the total 55,000 looms churning out grey cloth at a snail’s pace.

But the problem was not only one of a crippling shortage of labour.

Faced with mounting losses, owners of textile units were paying the few remaining workers a fraction of their pre-Covid-19 salary of Rs 15,000-18,000 a month.

That was then. Today, Gujarat’s textile hub is witnessing a spectacular rebound.

The nearly Rs 70,000 crore synthetic textile industry of Surat, which had come to a standstill during and in the immediate aftermath of the lockdown, is humming once again.

Kotadiya, for instance, has not only added more machines at his unit, but has also increased his manpower to 60 from the 48 that he had before the pandemic.

“Business was crawling for a few months. However, after Diwali, there has been no looking back,” says Kotadiya, whose unit is one of the few in Surat that has water jet jacquard machines that roll out designer colour fabrics.

The workers, too, are profiting from the revival. Pitambar Behera, 36, and his two brothers, who work at a powerloom on the Udhna-Magdalla Road in Surat, have just managed to clear an old debt of over Rs 10 lakh left by their deceased father.

“I thought my life was over when the lockdown happened and I had to return home to Ganjam in Odisha.

“The revival here has not only helped me get jobs for my brothers, but it has also repay my father’s debts,” says Behera, who got a salary hike and has managed to treble his family income.

There are around 450 textile processing units and over 600,000 weaving and knitting powerlooms in Surat.

Unit owners like Mayur Chevli of DM Textiles on the Udhna-Magdalla Road powerloom cluster estimate that they suffered losses of anywhere between four and six months of business last year.

“However, with the revival in the retail market post Diwali, unit owners like us were desperate to get as much business as possible.

“So we began wooing workers back with higher salaries,” says Chevli, who has also expanded his business.

In normal times, textile workers in Surat are relatively better off than their peers in other industries since they earn on a piece rate basis.

This means that for every metre of grey cloth or fabric that they churn out, they get paid between Rs 2 and Rs 5, which amounts to an average monthly salary of Rs 15,000 to Rs 20,000.

What has also worked in Surat’s favour is that unlike other textile clusters in the country, the industry here manufactures synthetic fabric, garments, saris and caters to the lower and middle income groups.

It is this segment that has made a comeback in the retail market since the festive season.

However, it is only the yarn makers who have gained the most, with synthetic yarn prices being increased from Rs 90-Rs 95 per kg to Rs 130-Rs 135 per kg — a whopping 45 per cent rise over last year.

The subsequent units in the textile value chain have not been able to increase prices as much, thereby losing out on the profit they could have earned otherwise.

Since Diwali, fabric prices have risen by only 10-15 per cent.

It is not just Surat’s textile industry that has made a comeback.

Take diamantaire Arjan Bambaliya. From a less than 2000-sq-ft diamond polishing unit on the second floor of a commercial building in Katargam in Surat, he has recently gone on to rent an entire floor in an adjacent building.

Post Diwali, he has also upped the number of his employees to 75, from less than 50 before the pandemic.

His workers are now earning at least 20 per cent more than their pre-Covid salaries.

“When the lockdown ended, we were in throes of mounting inventory and cancelled orders.

“However, as overseas markets began opening up and clients realised we could honour orders, things started improving,” says Bambaliya.

Nine out of 10 diamonds in the world are polished in Surat, and the roughly 6,000 diamond polishing units here employ a workforce of over 700,000, clocking an annual turnover of $24 billion or Rs 1.7 trillion.

According to Dinesh Navadia, industry veteran and regional chairman of the Gems and Jewellery Export Promotion Council, not only did Surat’s diamond industry tide over the lockdown by working on a long-pending inventory of over $2 billion, it has seen a spurt in demand and exports since November last year.