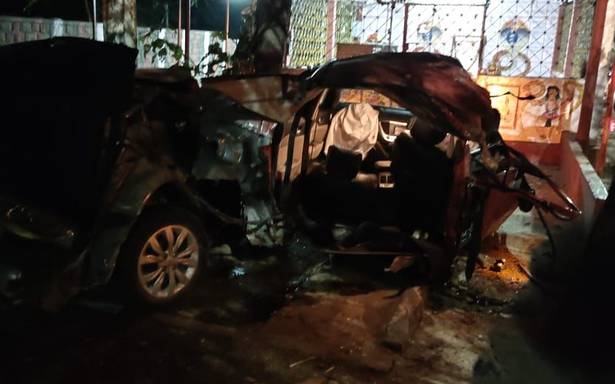 According to police, the accident took place around 3:30 am when the victims were going towards Lingampally

In a suspected case of drunk and driving, a private bank employee and two junior artists were killed, while their friend suffered severe injuries before dawn on December 18 when the car they were travelling in slammed into a roadside tree near University of Hyderabad under Gachibowli police station limits.

The victims are Abdul Raheem (25), a bank employee, and junior artists N. Manasa (23) and Manasa (19). Injured Sai Siddhu (24) is battling for life at a private hospital in the IT Corridor.

According to police, the accident took place around 3:30 am when the victims were going towards Lingampally from Siddhu’s residence at J.V. Hills, Kondapur.

They went to the injured person’s house to discuss a scene of a serial and reportedly consumed alcohol, before going for a drive.

Abdul Raheem booked the car from app-based self-drive rental company, Zoomcar, and picked up N. Manasa and Manasa. Abdul Raheem stays in a hostel at Ameerpet.

While Siddhu was sitting next to driver, the junior artists were occupied in the rear seat.

The vehicle was believed to be zooming at 100 kmph when Abdul Raheem lost control on it, veered left, before crashing into a roadside tree. The impact of the accident was such that the car split in half and the airbags too were opened.