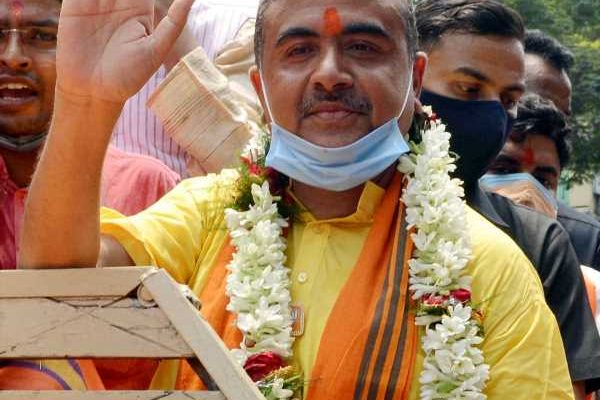 Bharatiya Janata Party leader Suvendu Adhikari has earned a reputation as a ‘giant slayer’ by defeating Chief Minister Mamata Banerjee in the battle for Nandigram, even though his party lost heavily in the larger war to woo Bengal.

After a see-saw fight till the last round, Adhikari won the seat by a narrow margin of just over 1,900 votes.

Though a pyrrhic victory for the BJP, the party he chose to align himself against his former mentor Banerjee, it nevertheless is being seen as a morale booster for the saffron party as his former party, the Trinamool Congress under Banerjee’s leadership, has garnered an overwhelming 213 seats out of 292 seats which went to polls.

Though Banerjee, who had initially sought re-counting amidst allegations of illegalities in the counting procedure, has now said she will be moving the court of law on the result. Adhikari for the moment has become the toast of the hour in BJP circles.

More than an arena for a mere political fight, Nandigram turned into the ground for a bruising battle for survival, as Banerjee threatened to overshadow both Adhikari and his locally powerful family which has nursed the area for decades, by handing him a defeat on his home turf and possibly pushing him into political oblivion.

His victory now squarely places him in the front ranks of the BJP’s leadership for Bengal and there is speculation that he will be given higher responsibilities by his party.

The backwater constituency in Purba Medinipur district which was witness to a fight-back by peasants led by the TMC against forced land acquisition for a chemical hub in 2007, turned into a battleground of titans when Banerjee suddenly decided to switch from her Bhabanipur seat to the constituency held by her former lieutenant Adhikari.

To tailor himself to his new party’s beliefs and for a future role in its hierarchy, Adhikari had worked to change his image from an inclusive leader of the land acquisition movement to being a mascot of the Hindutva brigade, claiming that if the TMC wins it could turn Nandigram into a “mini Pakistan”.

Trained in Rashtriya Swayamsevak Sangh shakhas during his formative years, Adhikari was baptised in student politics in the late 1980s as a member of Chatra Parishad, the Congress’s student wing. His first brush with electoral politics came in 1995 when he was elected as a councillor in Kanthi municipality, which his father headed from 1967 to 2009.

However, his first major assignment was as election agent to Nitish Sengupta, the Congress candidate from Kanthi Lok Sabha seat in 1996. Three years later, Adhikari along with his father switched over to the Trinamool Congress barely a year after it was formed.

Thereafter, he unsuccessfully contested elections twice — in the 2001 assembly poll and the 2004 Lok Sabha election. He tasted success in 2006 when he won the Kanthi assembly seat.

The Nandigram anti-farmland acquisition movement in 2007 changed Bengal’s political landscape and catapulted him to the front row of the TMC.

Adhikari soon became a member of the TMC’s core group and was appointed as president of the Trinamool Youth Congress. In 2009 and 2014, he won the Lok Sabha polls from Tamluk. After Banerjee stormed to power in the state in 2011, many saw Adhikari, who has a mass following in pockets of South Bengal, as her eventual heir apparent.

The seeds of mistrust between the two leaders were sown on the TMC’s first annual Martyrs’ Day rally after coming to power on July 21 in 2011, when Banerjee announced the entry of her nephew, Abhishek into politics.

Abhishek, then just 24, was named the president of All India Trinamool Yuva, an organisation parallel to the TMC Youth Congress. The decision had Adhikari fuming as the party constitution had no place for two youth wings.

Sensing that Adhikari might change sides as he was in talks with the Congress, Banerjee nominated him from the Nandigram assembly seat in 2016 and inducted him into the state cabinet. She even gave him three portfolios.

But Abhishek’s meteoric rise in the party and its decision-making for a continued to plague Adhikari, who nursed a feeling that the party did not give him his due. After its 2019 Lok Sabha poll debacle, the TMC abolished the observer’s post, which many feel was done to clip his wings.

There were rumours in political circles that Adhikari might be named the state president of the TMC at the 2020 Martyrs’ day virtual rally. However. this did not materialise.