ISI chief Faiz Hameed coerced the Taliban to announce an interim government guaranteed to preserve Pakistan’s control over the levers of power in Kabul, observes Ambassador M K Bhadrakumar, who played a stellar role in beginning India’s dealings in Afghanistan in 1994.

The regional States will be shell-shocked by the brazen way Lieutenant General Faiz Hameed, head of Pakistan’s Inter-Services Intelligence, coerced the Taliban to announce an interim government that is guaranteed to preserve Rawalpindi’s control over the levers of power in Kabul.

There are several things to be noted about the so-called interim government announced by the Taliban on September 7.

The ‘moderate’ Taliban political chief Mullah Abdul Ghani Baradar, supposedly number 2 in the Taliban hierarchy, has been designated to serve as first deputy to Mullah Hasan Akhund who will be the acting prime minister.

Baradar, who led the Taliban delegation at the Doha talks and was earlier mentioned widely as the likely head of the new Taliban government, has been pigeonholed — assigned to a titular post which will be, typically, an overly restrictive one.

Mullah Akhund will wield the baton. Now, he is one of the most enigmatic figures in the Taliban movement, rarest of rare exceptions of a shadowy figure who did not participate in the ‘jihad’ against the Soviets in the 1980s, but only to emerge as the powerful ‘ideologue”‘ of the movement to serve on the shura councils.

He is singularly credited with the destruction of the Buddhas of Bamiyan in 2001 and had a pivotal role in the development of the Taliban’s religious identity rooted in the brand of strict Islamist ideology, known as Deobandism.

Akhund dictated the ideological justification for the insurgency against the US-backed Afghan governments.

Significantly, he operated almost entirely in exile from Pakistan through the past 20-year period.

Akhund’s impeccable Pashtun lineage is drawn from the powerful Durrani tribe from Kandahar, which, historically, anointed the Afghan rulers.

After the overthrow of the Taliban regime (where he had served as foreign minister), Akhund landed with the powerful position as the head of the Rahbari Shura council of leaders, often called the Quetta Shura, which the ISI put together to plot the Taliban’s second coming to power. 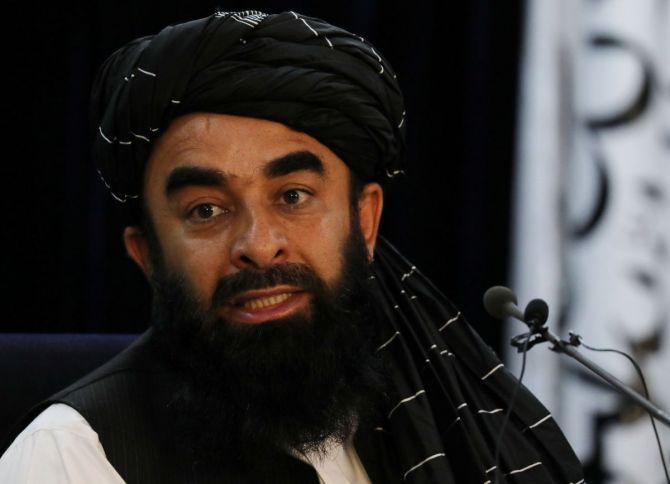 The sidelining of Baradar is to be attributed to the political tension between him and the Haqqani Network.

The ISI has had the final say in the matter.

Baradar’s conciliatory politics with Hamid Karzai, then the Afghan president, had earlier cost him 8 years incarceration in an ISI jail — until President Trump wanted him in Doha.

The ISI never trusted him.

The most startling thing about Akhund is that his entrenched beliefs include treating women as mere chattels of men to bear children and treating ethnic and religious minorities as a lower form of life.

He has been hard as rock on issues of civil rights.

His edicts in the 1990s, adopted by the Taliban, included the banning of women’s education, enforcing gender segregation and the adoption of strict religious garb.

In retrospect, Baradar served merely as the facade of reason before the international community in Doha.

With Akhund on one side and Sirajuddin Haqqani, the interior minister-designate on the other side, he finds himself between the rock and a hard place.

Sirajuddin is unquestionably the blue-eyed boy of the ISI. His appointment is horrible news for New Delhi.

But the big question for the future is about the US equation with the Haqqani Network.

The mythology harps on the FBI notification of a ‘reward of up to $10 million for information leading directly to the arrest of Sirajuddin Haqqani’ and its clarion call, ‘If you have any information concerning this person, please contact your local FBI office or the nearest American Embassy or Consulate.’ 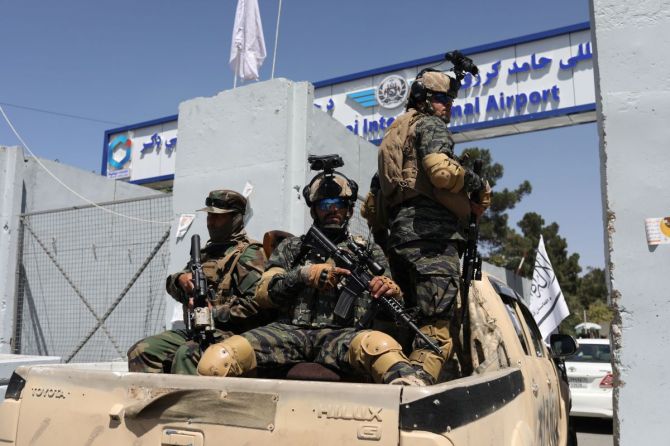 The FBI calls Sirajuddin ‘a specially designated global terrorist’ with close ties to al-Qaeda, but the charges against him are unsubstantiated and remain vaguely worded.

Thus, Sirajuddin is ‘wanted for questioning in connection with the January 2008 attack on a hotel in Kabul, Afghanistan, that killed six people, including an American citizen. He is believed to have coordinated and participated in cross-border attacks against United States and coalition forces in Afghanistan. Haqqani also allegedly was involved in the planning of the assassination attempt on Afghan President Hamid Karzai in 2008.’

If the US could nab Osama bin Laden from a Pakistani cantonment town, why should it have outsourced the task as in the Wild West — posting a notice in every bar and brothel?

The point is, the US state department’s archival materials also show that the US and the Haqqanis go back a long way.

Sirajuddin’s father Jalaluddin Haqqani’s mujahideen group was actually the only group in the 1980s jihad, which was trusted by General Zia-ul Haq, Pakistan’s then military dictator, to be allowed to have direct dealings with the CIA.

The CIA, of course, described him as a ‘unilateral’ asset who in turn received tens of millions of dollars in cash directly.

Indeed, when the time came for the CIA to transfer Osama bin Laden from Sudan to Afghanistan, it was to the safe custody of none other than Jalaluddin that the fugitive was left. Such was the bonding!

True, Jalaluddin subsequently refused to betray bin Laden and, possibly, helped him to evade the American net in the fastness of the Tora Bora mountain caves in December 2001.

But, apparently, the two sides since moved on.

In fact, Lieutenant General John Nicholson, told the senate armed services committee during hearings when he was picked to lead the US and NATO forces in Afghanistan in January 2016 that the US counter-terrorism operations in Afghanistan were not targeting the Haqqani network of militants.

To quote the general, ‘They are not part of that designation right now… The Haqqanis are principally a focus of the Afghan security forces.’

General Nicholson gave a laboured explanation that US counter-terrorism actions focused on al-Qaeda and Islamic State.

The US expected Pakistan to put enough pressure on the Haqqanis to prevent cross-border attacks!

The four star general indulged in this sophistry full 8 years after the Haqqani Network’s attack on the Indian embassy in Kabul.

(It is a matter of shame and disgust, nothing less, that India’s Afghan policies all along toed US strategies in Afghanistan — right up to this day so much so that Prime Minister Modi is reportedly looking forward to discussing with President Biden on the sidelines of the Quad summit in DC how the coordination can be strengthened in the current circumstances.) 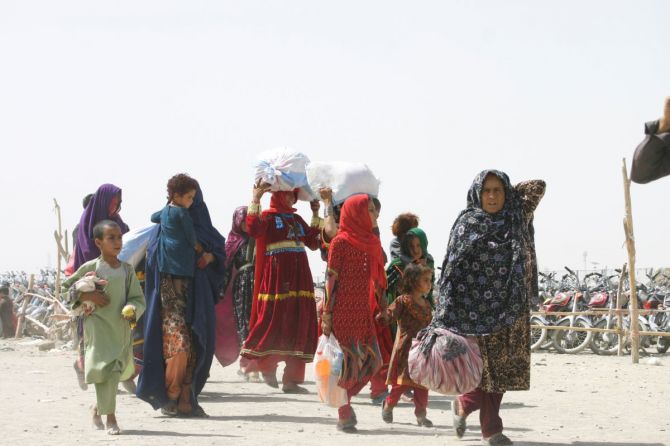 By the way, who is Maulawi Amir Khan Muttaqi, the foreign minister-designate in the interim government?

Ambassador Peter Tomsen, the US special envoy on Afghanistan from 1989 to 1992, has written in his classic work The Wars of Afghanistan: Messianic Terrorism, Tribal Conflicts, and the Failures of Great Powers that then Pakistan president Pervez Musharraf personally called then US president George W Bush on or about November 2001 for a VIP airlift out of Kunduz which was besieged by the Northern Alliance militia under Rashid Dostum (with support of US special forces) in the downstream of the 9/11 attacks.

The well-known investigative journalist Seymour Hersh later wrote based on briefing from ex-CIA sources that US central command set up a special air corridor out of Kunduz to ensure the safety of the Pakistani military flights.

Close to a thousand people were evacuated, including al-Qaeda members, in the Kunduz airlift (known famously as the ‘Airlift of Evil’) to remote bases in Chitral and Gilgit in Pakistan occupied Kashmir.

And the grapevine is that one of the VIPs so evacuated was Maulawi Amir Khan Muttaqi, apart from senior Pakistani military officials.

Can Pakistan get away with all this?

This interim government won’t fly easily, but it won’t wither away either, although it can be recast. The regional capitals will react — Tehran and Moscow (and possibly even Beijing).

They have been taken for a ride by the Pakistani narrative of ‘inclusive government’.

Pakistan dared to push the envelope with the cool assessment that the US and its Western allies will engage with the Taliban once the dust settled down.

The visit by UK Foreign Secretary Dominic Rabb on September 3 to Islamabad was the clincher.

On September 5, General Hameed took off for Kabul.

By September 7, we already saw the Taliban’s response to his dog whistle.