The AIADMK has been in power in Tamil Nadu for two terms, since 2011, and hopes to retain its position. The DMK, on the other hand, is betting on a mixture of incumbency and instability within the ruling party to pull through. 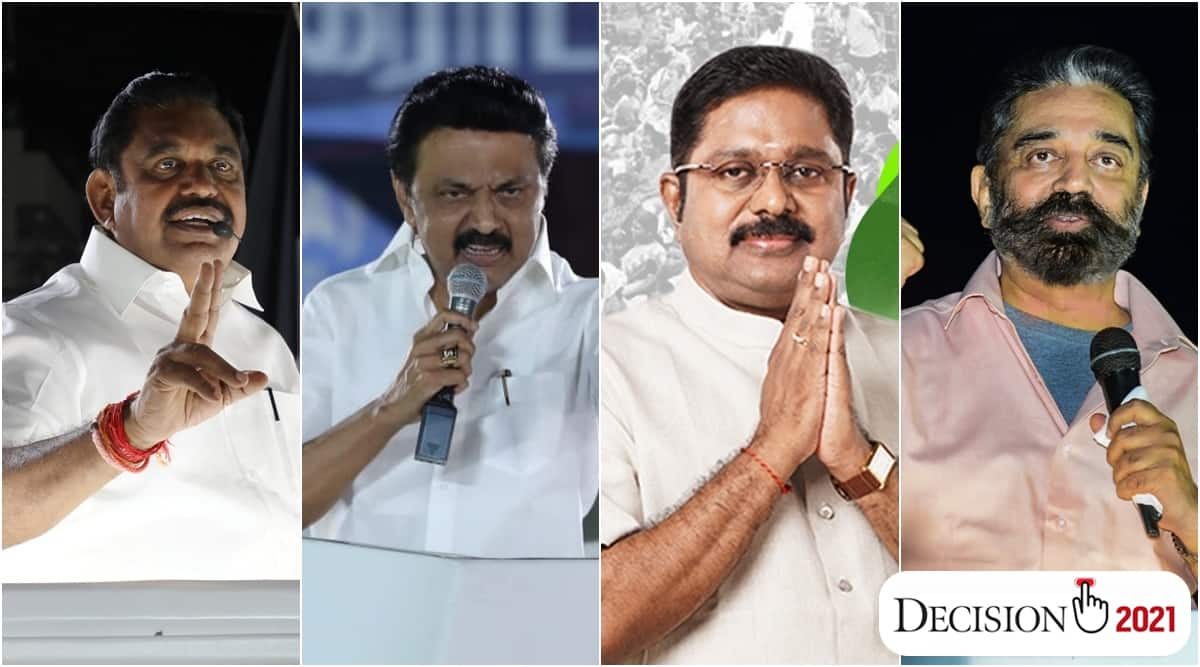 Tamil Nadu voted for its 16th Legislative Assembly on April 6, results of which will be declared on Sunday. In the 234-seat House, a party needs at least 118 seats to win the election and come to power. This election is the first in the state without two of Tamil Nadu’s towering political figures, M Karunanidhi and J Jayalalithaa.

The AIADMK has been in power in Tamil Nadu for two terms, since 2011, and hopes to retain its position. The death of Jayalalithaa in 2016 threw the party into turmoil with several factions trying to claim her legacy. Edapaddi K Palaniswami and O Panneerselvam, who forged an alliance and became Chief Minister and Deputy Chief Minister, respectively, have managed to keep the party afloat.

The death of Karunanidhi gave rise to M K Stalin, his son and political heir. Unlike in the AIADMK, the DMK saw a smooth transition within the party as Karunanidhi had groomed his son for many years before his death. A mixture of incumbency and instability within the AIADMK helped the DMK put on a good show in the 2019 Lok Sabha elections followed by the local body elections. While DMK looks to return to power after a decade, one question that is constantly raised is the alleged violence and abuse of power during its reign from 2006-11.

Apart from the National Democratic Alliance, led by AIADMK, and Secular Progressive Alliance, led by DMK, which hold sway over 70-80 per cent of the voter base, there are other noteworthy contenders in the race this time around.

TTV Dhinakaran’s Amma Makkal Munnetra Kazhagam (AMMK), another faction of the AIADMK that was birthed following the death of Jayalalithaa, is putting up a fight. Interestingly, AMMK managed to seal an alliance with Vijayakant’s Desiya Murpokku Dravida Kazhagam (DMDK), a long-time ally of the AIADMK. It is also contesting with the Social Democratic Party of India (SDPI), the All India Majlis-e-Ittehadul Muslimeen (AIMIM) and a handful of other regional parties.

Then there’s actor-turned-politician Kamal Haasan, who launched his party Makkal Needhi Maiam (MNM) and threw his hat in the ring. Haasan, who made his political debut from Coimbatore South on April 6, has been critical of both the major alliances and believes his party is the alternative.

MNM also contested the Lok Sabha elections, but failed to win a single seat and garnered a vote share of less than 4 per cent. There were 62.6 million people eligible to vote this year, including 3.09 million male voters, 3.19 million female voters and 7,192 from the Third Gender.

The Election Commission (EC) ordered repolling in one polling station in the Velachery Assembly constituency after two men were found carrying EVM machines. The poll body declared the vote on April 6 as “void” and repolling took place on April 17.

The Tamil Nadu polls were held amid the coronavirus pandemic, just before the nation began witnessing a second wave of infections. Due to the situation, the EC issued strict guidelines to ensure safety of poll workers and voters, including maintaining social distancing, wearing masks, thermal screening, using disposable gloves, decreasing the number of electors per booth and extending voting hours.

On counting day, the EC has mandating from its officers either a negative test or completion of two doses of Covid-19 vaccine to enter the counting centres. It has banned public gatherings outside the centres and also said no victory processions would be allowed.

The Madras High Court on April 26 came down heavily on the EC for “not stopping political parties” from violating Covid protocols during their campaign rallies, and said murder charges should probably be imposed on the panel for being “the only institution responsible for the situation that we are in today”.

“You have been singularly lacking any kind of exercise of authority. You have not taken measures against political parties holding rallies despite every order of this court saying ‘maintain Covid protocol, maintain Covid protocol,” the bench observed. It asked whether the EC “was on another planet when poll rallies were held”.

* Palaniswami, a four-term MLA, contested the polls from Edapaddi constituency, an AIADMK bastion. He is up against T Sampath Kumar of the DMK.

* Paneerselvam stood from Bodinayakannur in Theni district, which he has represented since 2001. The 70-year-old is contesting against DMK’s Thanga Tamilselvan, who moved to the party after having sided with the Sasikala-Dhinakaran camp in the AIADMK tussle following Jayalalithaa’s death.

* Stalin fought from Kolathur, a seat he has represented since 2011. The constituency in North Chennai has a population comprising Muslims and the lower and lower-middle class. He is up against AIADMK’s Aadi Rajaram.

* Dhinakaran contested from Kovilpatti instead of the R K Nagar seat, which he won in the 2017 bypolls. It is believed he chose this seat due to his party’s success in the local body polls in the region in 2019. He stood against AIADMK’s sitting MLA and minister Kadambur C Raju, who won from the seat both in 2016 and 2011, and K Srinivasan from DMK.

* Kamal Haasan stood from Coimbatore South against BJP’s Vanathi Srinivasan and Congress’ Mayura S Jayakumar. A constituency with largely middle-class and upper-middle-class voters, it was in this Assembly segment that MNM got more than 1 lakh votes in the 2019 general elections. Coimbatore South has about 12 per cent upper caste Hindu voters of north Indian descent who are seen as BJP supporters.

* Udhayanidhi Stalin, Stalin’s son, also made his political debut this election, standing from the Chepauk-Triplicane Assembly seat. He was up against AVA Kassali of PMK, an ally of AIADMK and L Rajendran of AMMK.

* In Karur, which registered the highest voter turnout, M R Vijayabhaskar of the AIADMK was up against Senthil Balaji of DMK. Balaji, who was once considered close to Jayalalithaa, went with the Sasikala-TTV Dhinakaran camp after Palaniswami ousted them from the party. In 2018, he switched to the DMK.

* Premalatha, the wife of Captain Vijayakant, stood from Virudhachalam. Vijayakanth had won from the seat in 2006, when he first contested an election. Premalatha is familiar with the constituency as she often campaigned here her husband. While the region is a traditional OBC-Vanniyar bastion which largely supports the Vanniyar-based Pattali Makkal Katchi (PMK) party, Premalath, from the Telugu Naidu community, is targeting the non-Vanniyar and minority votes in the region.

* R B Udhayakumar, a Jayalalithaa loyalist, contested from Thirumangalam in Madurai district. He is expected to retain the seat.

All the exit polls have predicted a clean sweep for the DMK alliance. The AMMK and MNM are unlikely to make much of a difference, according to the exit polls. 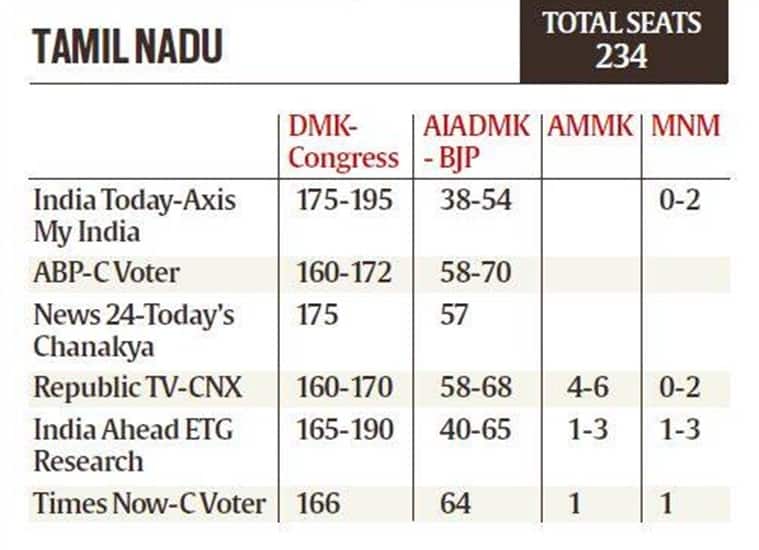 The incoming government, which will be sworn in by May 24, will face the challenge of tackling the second wave of Covid, which has brought with it a health crisis and economic hardship.