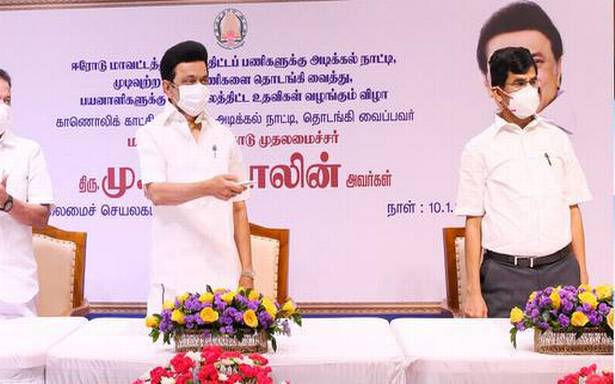 Infrastructure worth ₹104.81 crore launched and over 360 welfare schemes unveiled

Tamil Nadu Chief Minister M.K. Stalin on Monday virtually inaugurated welfare schemes and infrastructure worth ₹104.81 crore in Erode district. He also unveiled over 360 welfare schemes in the district, which are to be implemented at a total cost of ₹45.15 crore.

New buildings constructed for various government departments, including the Revenue and Disaster Management, the School Education, the Commercial Taxes and Registration and the Health and Family Welfare Departments, were inaugurated.

Foundation stones were laid for the Revenue and Disaster Management, the Electricity, the Prohibition and Excise and the Rural Development and Panchayat Raj Departments.