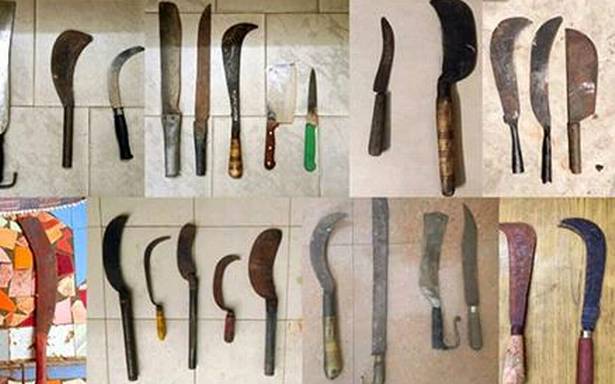 Director-General of Police C. Sylendra Babu has asked all district police and commissionerates to form special teams to deal with rowdy elements and gangsters.

At review meetings with top police officers in Madurai and Tirunelveli on Saturday, he asked them to follow murder cases as old as 10 years and prepare fresh dossiers on gangsters likely to be involved in retaliation. The instruction comes after the recent beheading of a woman at Dindigul, who was an accused in the 2012 murder of Devendrakula Vellalar Kootamaippu leader Pasupathi Pandian.

The details of such gangsters, with their photographs, will be uploaded in a special app, as it was done by the Madurai city police, Mr. Babu said. Keeping a tab on these elements “who usually prowl around between 6 p.m. and 10 p.m.” will help prevent any further untoward incidents, he said.

Mr. Babu said ‘Operation Disarm’ was conducted across the State in the last 48 hours to put an end to retaliatory murders. The police seized over 900 weapons , including three fire arms, and arrested over 2,500 rowdy elements. The officers were asked to closely follow the murder cases pending in courts and strive for the conviction of the perpetrators. “This will not only ensure punishment for the accused but also create fear among other anti-social elements.”

As many as 2,512 suspected criminals were arrested until Saturday morning in a State-wide storming operation and 934 dangerous weapons were seized.

A press release from the police headquarters said that in the last 36 hours of the operation, 16,370 persons with criminal records were subjected to verification. After verification, 2, 512 persons were arrested. Among the arrested persons, 244 have non-bailable warrants issued against them and 733 were sent to judicial custody as they had been involved in several criminal activities. The remaining 1,927 persons were released after they gave security bonds under Section 110 of the Code of Criminal Procedure for keeping peace.

Five country-made guns and 929 knives were seized from the arrested persons. The crackdown will continue against criminals who are involved in murders, the DGP said.

(With inputs from R. Sivaraman in Chennai)