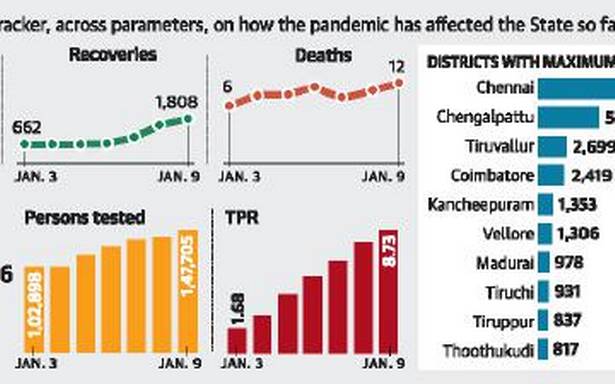 The number of persons infected with the novel coronavirus so far in Tamil Nadu crossed the 28-lakh mark and the persons under treatment breached the 50,000-mark on Sunday when 12,895 fresh COVID-19 cases were found among 1,47,705 persons tested.

Among the fresh cases were eight travellers from the United Arab Emirates, and one passenger each from Oman, Sri Lanka and the United Kingdom. As many as 23 persons who came by road from Bangladesh also tested positive. Among the domestic travellers were six from West Bengal; five from Jharkhand; three from Kerala; two from Andhra Pradesh; and one each from Maharashtra and Delhi.

As on Sunday, 185 persons were found to have been infected with the Omicron variant of the novel coronavirus. They include six cases cross-notified to Kerala (1), Puducherry (3) and Andhra Pradesh (2). So far, 179 persons have been declared to have recovered.

In Chennai, 6,186 persons were found to have been infected, and the number of active cases stood at 25,798. In Chengalpattu, 1,512 persons were infected. Tiruvallur reported 702 cases. In Madurai, 348 cases were detected. Kancheepuram reported 343 cases.

The official daily bulletin recorded the death of 12 persons, including four at private hospitals and eight at government hospitals. All the deceased had pre-existing health conditions. So far, 36,855 persons have succumbed to the infection.

The youngest person to lose his life was a 45-year-old diabetic man from Theni, a person living with HIV/AIDS and on anti-retroviral therapy. He was admitted to the Theni Medical College Hospital on January 6 and tested positive for COVID-19 the next day. He died of COVID-19 pneumonia on January 8.