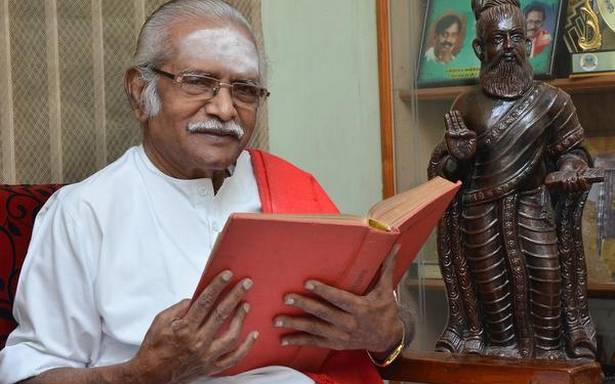 He was a master of pattimandram debating tradition

TIRUCHI: Noted orator, writer and academic So. Sathiyaseelan passed away late on Friday due to age-related ailments. He was 88.

Sathiyaseelan won the State’s Kalaimamani award in 2011 and the ‘Sollin Selvar’ prize in 2015 (as part of the Chithirai Thirunal awards) in recognition of his services to the Tamil language.

He was a popular pattimandram (debate) moderator and speaker and held the floor at over 10,000 meetings and pattimandrams. He wrote 22 books and made several audio recordings on a variety of topics related to Tamil civilisation and culture.

Family sources said that Sathiyaseelan remained active till the very end and was in the process of readying his latest book, a literary study of the commonalities between Thirukkural and Silappathikaram, for publication, when his health declined. The book was to be launched in Malaysia this week.

Born as the eldest of five children on April 14, 1933, in Perambalur to J. N. Somasundaram, a freedom fighter, and Meenambal, Sathiyaseelan was the first graduate in his family. He had also worked as a schoolteacher and college lecturer and, in his last post, was the principal of Urumu Dhanalakshmi College in Tiruchi.

His interest in public speaking was kindled by his early exposure to the speeches of orators and social activists such as Devaneya Pavanar, Swami Chidbhavananda and Natesa Mudaliar.

Though he was known for his love for Tamil, Sathiyaseelan actually wanted to be an English teacher. In an earlier interview with The Hindu, he said he joined Moorthy’s Tutorials in Madras (now Chennai) to learn English.

He was also a master of the Tamil debating tradition of pattimandram, where abstract topics are discussed by two teams of speakers in the presence of a moderator.

Sathiyaseelan is survived by his daughter Dr. Chitra Valluvan and wife Dhanabhagyam.