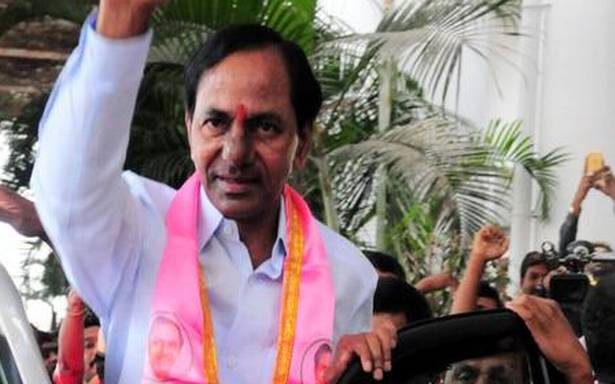 Stating that India showcased to the world that peace was the most powerful weapon to fight for the rights, the Telangana Chief Minister, K. Chandrashekhara Rao inaugurated the Azadi ka Amrut Mahotsav — the 75th Independence Day celebrations — at Public Gardens here.

The Chief Minister said the ‘father of the nation’ an apostle of peace and he inspired not just the country but people around the world taking on the mighty British just through peaceful methods. “It is our responsibility to tell the younger generation about the sacrifices made by our freedom fighter and how Mahatma Gandhi led the nation to achieve Independence,” he said.

Drawing parallel to the Telangana agitation, Mr. Rao said he too was inspired by Mahatma Gandhi’s peaceful protests while chalking out the programmes during the Telangana agitation, which too was achieved without violence. Freedom fighters then too had doubts over the peace approach of Gandhiji but the grit and determination showed by him while adopting peace as a strategy against the powerful British had given confidence to us as well, the CM observed.

Stating that world leaders, who led similar agitations for their rights like Martin Luther King too were inspired by Gandhiji’s methods, he said it was an honour for Indians that he continues to inspire people across the world. “The new generation must be apprised of the hardships that generation went through to give us freedom and ensure those qualities are imbibed. It should be celebrated grandly recalling the historic events of Independence struggle,” he said.

The Chief Minister also recalled the historic Dandi march started by Mahatma Gandhi on March 12, 1930 against the imposition of tax on salt and said just 79 people marched along with Gandhji for 384 km for 24 days to register their protest, but that sent shockwaves across the British empire. “We are starting these celebrations on the same day and will continue for 75 weeks with a series of events involving all sections of the people,” he said.

Mr. Rao had already sanctioned ₹25 crores for the celebrations in Telangana.

In a separate event, Governor Tamilisai Soundararajan inaugurated the celebrations in Warangal.