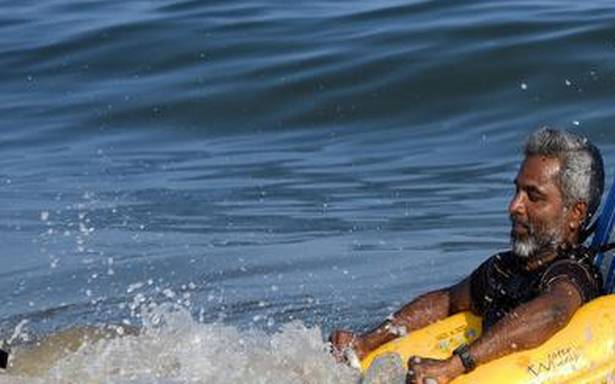 It was the first time in many decades for K. Nagadass, a resident of K.K. Nagar, to experience the joy of watching waves crashing over the shoreline and even step into the water.

Several persons with disabilities, like him, who do not beach, used the temporary pathway put up by the Greater Chennai Corporation on Monday evening. Many volunteers helped them get closer to the beach. “I came here after a friend informed me about the temporary pathway. I used to see the beach only from the road,” said Mr. Nagadass.

A portion of the beach behind the Gandhi Statue had been made temporarily accessible for persons with disabilities from December 27 to January 2. There may be a formal inauguration on Tuesday.

R. Satish Kumar, member of Disability Rights Alliance, said such events were organised every year to mark the World Disability Day celebrations. Earlier, carpets were used to create ramps but it was not comfortable for persons with disabilities. This time, wooden planks have been used for better access.

Floating wheelchair was brought from Kovalam beach for persons with disabilities to access beach waters. GCC has procured four beach wheelchairs for the purpose, he said.

Members want information on availability of wheelchairs to be put up for the benefit of beach goers. They want work on a permanent pathway proposed behind Gandhi statue to be taken up soon.

Vaishnavi Jayakumar, member of Disability Rights Alliance and co-founder, The Banyan, said the barrier-free path should become a permanent feature for persons with disabilities. “We have been waiting for permanent infrastructure to make beach more accessible for such persons since 2016. Permanent pathway must be created by 2022,” she said.

An audit made of the existing facilities at the Marina beach revealed that drinking water amenities and even pathways leading to the beach were not accessible, she said.