During his recent visit, the Pope presented a version of Christianity which is more inclusive, non-denominational, non-sectarian and non-Europeanised. 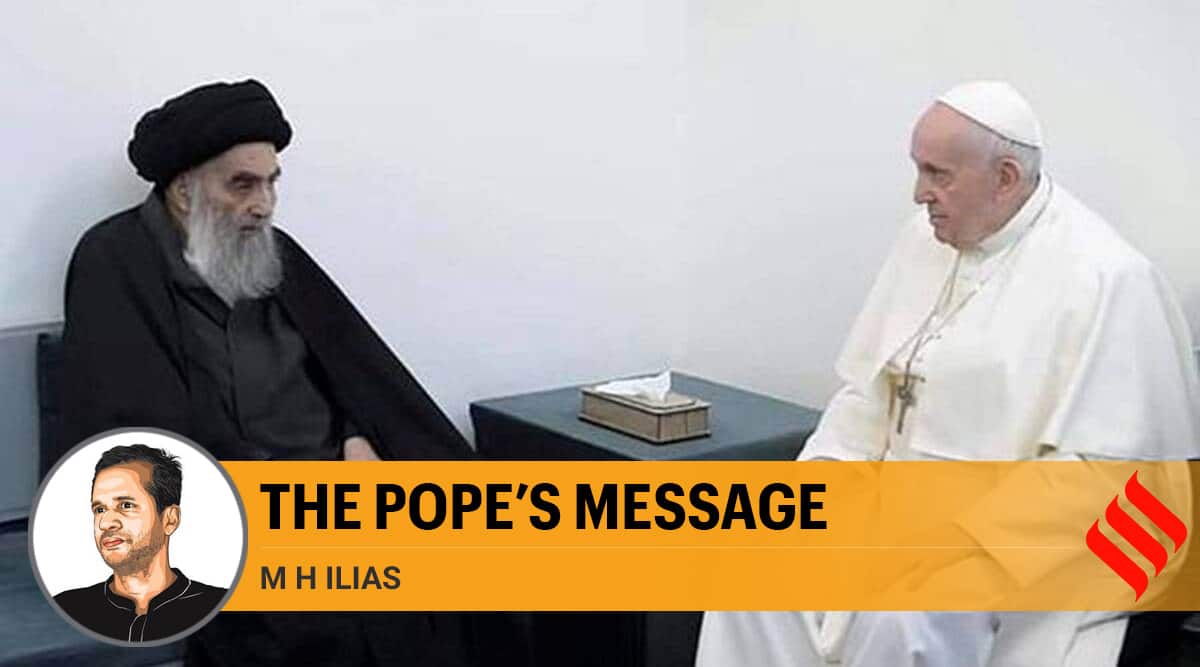 The visit of Pope Francis to Iraq, concluded in the beginning of this week, has led to speculation about its possible motives and urgency. Most agree on one thing: It is not politically calculated. Taking cues from his earlier gestures, one can safely say that the current Pope wouldn’t “do a Pope John Paul II”, whose political interventions during the Cold War in many ways served the interests of the Western Bloc led by the US. This visit, though, is a culmination of a series of failed efforts of the last two decades to bring a Pope to the birthplace of Abraham, that were initiated during the tenure of Pope John Paul II in 2000.

The theory that connects the visit of the head of Catholic Church to one of the major theatres of the US-Iran rivalry with the attempt of the US President Joe Biden to patch up the US’s strained relationship with Iran appears to be flawed. More likely is the analysis by historian Ibrahim al-Marashi, who compares Pope Francis’s visit to the journey that St. Francis of Assisi, a Catholic preacher and mystic, made some 800 years ago to the Middle East to heal the wounds that Crusade-induced violence caused in both Christian and Muslim societies. One of the highlights of St. Francis’s trip was his meeting with Sultan al-Malik al-Kamil, nephew of Saladin, who led the Muslim army against the Crusader states in the Levant. Pope Francis, on his part, began his journey with meeting one of the world’s leading Sunni clerics, Sheikh Ahmed el-Tayeb, the Grand Imam of Al-Azhar in 2017 and making a historic call for a cross-faith commitment to human fraternity.

St. Francis’s journey in the 13th century, though partially successful in terms of promoting peace and reconciliation between two warring communities, resulted in re-orienting policies of various missionary groups, including his own Franciscan order, towards a peaceful coexistence with Muslims.

Today, there is hostility and mutual distrust between the people of two major faiths. The rise of “cultural Christianity”, a proxy for Islamophobia and hostility towards migrants, makes the situation worse in parts of Europe and the United States. The crisis in the Islamic world deepens with the emergence of movements with a sectarian vision. The Pope’s interventions at this critical time, therefore, have more than a symbolic value.

With his efforts to reach out to various sects of Christianity in the East, the Pope intends to present a different, though not new, version of Christianity, which is more inclusive, non-denominational, non-sectarian and non-Europeanised. What one can reasonably assume from this move is his wish to make Christianity more appealing not just to Christians in the east, but to the followers of all Abrahamic religions. That is perhaps why Ur, the birthplace of Abraham, found a pivotal position in his itinerary.

What figured recurrently in the pontiff’s speech was the necessity of reviving an Abrahamic tradition for the common future of the communities. In Ur, the Pope said, “we seem to have returned home”. At many places, he greeted gatherings from different Semitic faiths with slogans such as “You are all brothers”, the words of Matthew’s gospel. This can be read as a significant move to create a counter-narrative to the theses presenting Islam as the “other”, alien to the Judeo-Christian tradition in the West.

Prior to visiting Iraq, the Pope travelled to Jordan and Palestine in 2014, Egypt in 2017 and the UAE and Morocco in 2019. He met many prominent Muslim scholars for initiating interfaith dialogue. All his positive gestures have created resonances in the Muslim world so far. But the fact remains that the sectarian violence in Iraq is intimately associated with the colonial past of the country; and the cynical use of religion by colonial forces to protect their own interests. A move which does not address this past, therefore, may not yield the desired result.

This article first appeared in the print edition on March 12, 2021 under the title ‘The Pope’s message’. The writer is professor and director, School of Gandhian Thought and Development Studies, Mahatma Gandhi University, Kerala.