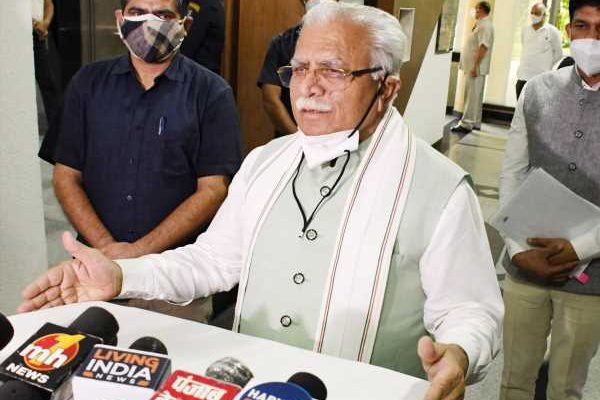 Haryana’s chief minister enjoys Narendra Modi’s support and protection and will be in office unless the state sees a massive administrative botch-up, observes Aditi Phadnis.

The Manohar Lal Khattar government in Haryana has completed two years of its second term. How has it performed?

If you go by what former chief minister and Congress leader Bhupinder Singh Hooda said, it is a hopeless government.

In a recent statement, the former chief minister said the state had record levels of unemployment, there was no law and order, and the government was quixotic in decision making.

‘According to the CMIE data, every third person in the state is unemployed as the government’s focus is more on retrenching employees than recruitment. Instead of giving jobs to the youth, the government has adopted a policy of sacking employees,’ Mr Hooda said on the day the Khattar government completed 600 days in office.

‘The government first advertises vacancies and then cancels the recruitment process,’ he added.

But this is only a very small part of the truth.

The fact is the Khattar government’s second term is marked by five years of experience, pressure from coalition partners, and a relative absence of corruption.

This is no small achievement even if some members of the Khattar cabinet don’t think so.

Mr Khattar enjoys the support and protection of Prime Minister Narendra Modi and will be in office unless Haryana sees a massive administrative botch-up.

And there’s no evidence of that happening.

Mr Khattar and Mr Modi have known each other since the days the latter was the prabhari (in charge) of Haryana.

Mr Khattar came into contact with the Rashtriya Swayamsevak Sangh during the Emergency in 1975 and joined it in 1977.

Impressed by the RSS ideology and conduct of swayamsewaks during the Emergency, he became a full-time RSS pracharak by 1980.

He was engaged in Haryana politics and liaised with Mr Modi, who was ‘lent’ to the BJP.

When the earthquake struck Bhuj and Kutch and Mr Modi became chief minister of Gujarat, Mr Khattar was invited to lead the committee for reconstruction and rehabilitation.

In 2002, he became poll in charge for Jammu and Kashmir.

And he was made chairman of the election campaign committee for Haryana in 2014.

Originally from Pakistan, Mr Khattar’s family was very poor and migrated to Haryana.

Mr Modi spotted him as a kindred spirit.

His plus point was deep and wide knowledge of the RSS organisation and the BJP’s support structure.

The other plus was and continues to be total personal honesty.

For Haryana, reeling from the cumulative effect of extortion and rent-seeking by successive governments, Mr Khattar represented the light that needed to be shined in the darkest corners of the government.

But there were problems that manifested themselves almost immediately.

Mr Khattar may have won elections for the BJP. But he himself became MLA for the first time in his life when he contested and won the Karnal seat.

The most experienced MLA was Ram Bilas Sharma (who had worked with Bansi Lal) and the one with extensive legislative experience was Anil Vij.

But it was Mr Khattar who got the job. The angst of the others was barely hidden. It simmers to this day.

Mr Khattar did what he knew, understood, and trusted the most — the advice of the RSS or those connected with it.

Top bureaucrats were appointed not on the basis of merit: They were given charge because of their connections, family or otherwise, to the Sangh.

In a perfect world, this would have trumped caste and other linkages.

But in Indian society and politics, caste is ever present.

Administrative failures of the Khattar government were blamed on caste (Jats, a significant caste group, went on the rampage in the state in 2016, which the administration was unable to control.

The government put the blame on the sense of entitlement of Jats); and lack of experience (the militant resistance when police attempted to arrest self-styled godman Rampal after he failed to appear in court 43 times and later, the Dera Sacha Sauda build-up).

But the people, by and large, put it all down to incompetence.

Then came the 2019 assembly elections.

While the BJP won all 10 Lok Sabha seats in Haryana, it performed less than satisfactorily in the assembly polls later in the year.

Though it improved its vote share, it could not cross 40 seats out of 90 and was forced to go, cap in hand, to the Jannayak Janata Party, headed by Dushyant Chautala.

That seems to have been a life-changing experience for Mr Khattar.

From being the master of all he surveyed, he became the man who needed to manage contradictions — within his own party, from rivals like Home Minister Anil Vij to those posed by his coalition partners.

Mr Khattar seems to have grasped the art of the political compromise. His handling of the farmers’ stir testifies to this.

Elections in Haryana are still some distance away.

But Anil Vij and Dushyant Chautala are important personages in the government.

Unless a line of succession in the BJP is made clear, everyone in the party will continue to believe they are better ‘hriday samrats’ of Haryana than Manohar Lal Khattar.