As the Taliban swept through Afghanistan, facing little resistance, one man, Amrullah Saleh, vowed not to yield. The Indian Express traces his arc from a defence official in the Rabbani govt to spy chief and later vice-president of Afghanistan. Now, encircled by the Taliban, the pro-India Tajik politician has a ‘death wish’ — to fight on. 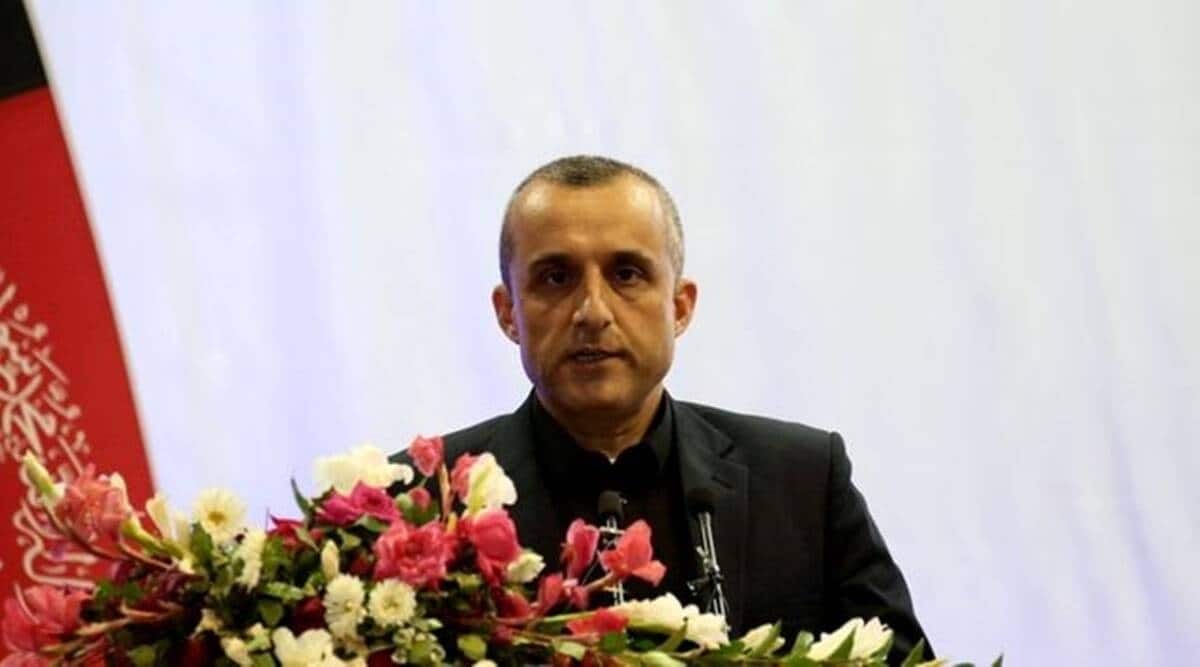 In 2007, Afghanistan’s then president Hamid Karzai took his intelligence chief Amrullah Saleh for a meeting with his Pakistani counterpart General Pervez Musharraf. They handed the Pakistani president a dossier of the whereabouts of some al-Qaeda and Taliban operatives hiding in Pakistan, including in some safe-houses in Mansehra, a hilly area adjacent to Abbottabad.

“Musharraf was dismissive of the information but uncomfortable at being put on the spot. He shifted in his chair, grasping the arms, almost shaking at the mention of Mansehra,” journalist Carlotta Gall writes in her book, The Wrong Enemy: America in Afghanistan 2001-2014. She quotes Saleh as saying, “I did not know then that that was where bin Laden was hiding.”

For Pakistan and the terrorist network it is known to back, including the Taliban and al-Qaeda, Saleh — a Tajik from the northeastern province of Panjshir — has always been a thorn in the flesh. Not surprising then that he is now the key pillar of resistance against the Taliban, as it took control of Afghanistan, sweeping into capital Kabul, on August 15.

As president Ashraf Ghani fled the country, Saleh, the country’s first vice-president, relocated from Kabul to Panjshir, where he announced that he was the acting president under the Constitution of Afghanistan.

Within days, grainy videos of Saleh playing volleyball and trekking in the mountains in Panjshir Valley surfaced on social media.

But with Panjshir falling to the Taliban, Saleh’s whereabouts remain unknown. While his supporters say he is still in Panjshir, others claim that he has escaped to Tajikistan, along with Ahmad Massoud, the 32-year-old son of his mentor, the late Ahmad Shah Massoud.

His last tweet, on September 3, five days before Panjshir fell, reads: “Resistance is the nom de guerre of everyone here. RESISTANCE.”

Many believe Saleh, the last man standing against the Taliban, has only made a tactical retreat to fight another day.

For Saleh, who is just 48, the fight started early in life.

On September 26, 1996, when the Taliban first captured Afghanistan, Saleh was a junior staffer at the Afghan Ministry of Defence headed by Massoud in the government of Burhanuddin Rabbani.

With the mujahideen government of Rabbani being forced to retreat to Panjshir, the Taliban began hunting for, among others, Saleh, a key aide of Massoud.

“They found my elder sister, Mariam, then in her fifties, and beat and tortured her, trying to force her to reveal my location. She refused. Later, the Taliban returned to her neighbourhood to demand she turn over her daughters to be married off to their fighters. She was able to escape with them, fleeing the city altogether. My sister struggled with that memory until she died in 2016,” Saleh said in a piece that appeared in the Time magazine on February 28, 2020, the day the US signed a deal with the Taliban in Doha, Qatar.

Despite that deeply traumatic association, for Saleh, the fight against Taliban, and its benefactor, Pakistan, was more than just personal.

Former Indian ambassador to Afghanistan Vivek Katju, who served in Kabul in the post-9/11 years from 2002 to 2005, says, “Saleh is a true Afghan patriot… I have the highest respect for his courage and for putting the interest of Afghanistan above everything else.”

Born in October 1972, Saleh, the youngest of five children, grew up in Kabul to a migrant family from Panjshir Valley. Orphaned at seven, like many Afghans who grew up during the days of the Soviet occupation in the 1980s, Saleh witnessed political violence up close — one of his brothers disappeared and was killed, and another, an Air Force officer, was assassinated in Kandahar.

At 22, he joined Massoud’s guerrilla fighters in Panjshir.

Impressed with Saleh’s sharp mind and his command over English, the senior Massoud, one of the main leaders of the Northern Alliance, a resistance group formed against the Taliban, soon took him under his wings. By his 20s, Saleh was already one of Massoud’s main advisers.

In the mid-1990s, Saleh moved to Russia, where he learnt Russian, but returned and evaluated that the Russians wouldn’t be of much help. Massoud also asked him to go for negotiations with the Taliban, sponsored by the UN.

In 1999, by which time the Taliban had taken over, restricting the Northern Alliance to Panjshir and northern Afghanistan, Massoud sent him to the US to be trained by the CIA.

“At the CIA school, Saleh was a bit bored by the paramilitary instruction. He was more drawn to the craft of intelligence collection… He peppered the CIA officers on the faculty with questions. When the course was over, Saleh went to Borders (a book shop) to buy a stack of books about spy services and intelligence history,” Pulitzer Prize-winning journalist Steve Coll wrote in his book, Directorate S: The CIA and America’s Secret Wars in Afghanistan and Pakistan, 2001-2016.

Massoud later posted him to Dushanbe, Tajikistan, from where he coordinated with the CIA for military equipment for the Northern Alliance, which usually came via Frankfurt, Germany. India too helped Massoud’s Northern Alliance.

Massoud’s assassination on September 9, 2001, two days before the 9/11 attacks, meant that he had to reorganise the Northern Alliance. But 9/11 had altered equations and, less than six weeks after the US invaded Afghanistan in October 2001, the Taliban fell and a new government propped up by the US came into place.

In 2004, Saleh, who worked with the new leaders, was appointed intelligence chief in Karzai’s government. Among Saleh’s intelligence assessments then was that by 2009, the Taliban would start regrouping and mount assaults on major southern cities — a prescient warning as Pakistan’s ISI and the Haqqani Network would mount attacks on Afghanistan, including the 2008 attack on the Indian Embassy in Kabul.

Indian officials, who have interacted with him, vouch for his knowledge of security matters.

Jayant Prasad, who was India’s ambassador to Afghanistan in 2008-09, says, “Saleh was very hands-on, very available and ready to help with security matters.”

After the Taliban attacked one of the meetings of the Loya Jirga in 2010, Saleh resigned as intelligence chief.

Gautam Mukhopadhyay, who was India’s ambassador from 2010 to 2013, says, “He is uncompromisingly anti-Pakistan, and incredibly informed on intelligence matters,” he said. He survived several assassination attempts by the Taliban and Pakistan-backed ISI.s

Besides his penchant for fitness — he is known to be a regular at the gym — Indian diplomats who have served in Afghanistan talk about Saleh’s interest in India. “He would look at India as an example of democracy and pluralism,” says Mukhopadhyay.

While he admires India, almost as a corollary, he is a “thorn in the flesh” for Pakistan. “He sees through Pakistan’s games, he knows them like a stalker, he can read their mind… that’s why they (Pakistanis) hate him,” he says.

Vikram Sood, who was R&AW chief during 9/11, calls Saleh a “gutsy fellow”. “He is a young man…He came across as very impressive. He knew what he was talking about, his facts were accurate.”

Despite their open admiration for the Tajik leader, current and serving diplomats admit Saleh is fighting a lonely battle this time.

“He expected two things to happen — general uprising among people, and external assistance,” an Indian official told The Sunday Express, “but both did not happen” as the US and its allies abandoned the Northern Alliance this time.

A former intelligence official who is known to Saleh says the Afghan has a “death wish” as he is surrounded by the Taliban. “He wants to fight on,” he said.

On Thursday, on the 20th anniversary of Massoud’s assassination, the Taliban vandalised his mausoleum in Panjshir. And on Friday, came reports that Rohullah Saleh, the elder brother of Amrullah Saleh, was tortured to death by the Taliban.

As Coll writes in Directorate S, on September 10, 2001, a day after Massoud’s assassination, Saleh told the CIA pointsperson, “The decision is that we will fight… we will not surrender. We will fight to our last man on the ground. This resistance is not about Massoud. It was about something much, much bigger. We will hold.”

For Saleh, exactly 20 years to that day, life has come full circle.