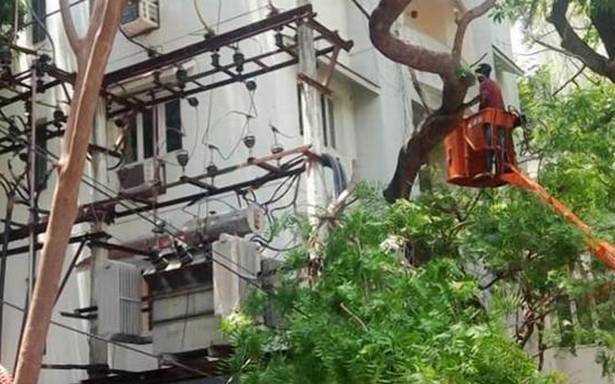 With the monsoon in the offing, intense tree-pruning exercises are being carried out across the city and its outskirts. A close look at what can happen to trees whose wounds are left unattended

“When trees are pruned and the cut sections are not covered properly till the wounds heal, the door is being left open for borers to enter. The cut sections would have to be covered with wax or some kind of a sheet that prevents water from entering and creating holes that would give these borers, which are larvae of certain insects, a foothold. From there, a lot of things can happen. Repeated borer infestations can weaken a tree and cause it to fall. These trees can dry up or die,” says D Narasimhan, member of the Tamil Nadu Biodiversity Board.

As the process of decay happens unnoticed over a lengthy passage of time, the plague afflicting trees with branches exposed from pruning goes unaddressed.

Botanists and horticulturists agree that the process of borer infestation can be triggered by any form of injury to the tree. It is for this reason that the practice of nailing boards on trees is frowned upon. However, oddly enough, not securing and treating pruned sections with pest-control solutions rarely makes it to the radar.

K Rajamani, professor and head of floriculture and medicinal crops at TNAU Coimbatore, spotlights the fact that when a tree has suffered any form of injury — a catchall that includes cuts resulting from pruning exercises — dealing with borers would require elaborate measures chalked up by an entomologist, and even then, control of the situation can prove frustratingly elusive.

Trees can be plagued by fungal as well as pest infestation, but the striking distinction between the two lies in their diagnosis. Narasimhan elaborates: “Fungal infection is caused by a group of fungi called wood rot fungi which can affect the trunk even without a cut. Fungal infections are also a threat, but they can be detected. Insect borers go inside and damage the core of the trunk, undetected.”

As a matter of best practice, the pruned section needs to be protected, says Rajamani, adding that the least that can be done is using readily available fungicidal solutions.

“Fytolan, blue copper and bavistin are chemicals used as fungicide and are easily available. Just two grams of any of these chemicals in a bit of water will make a paste that can be applied to the cut portion,” Rajamani explains.

K Raghavendra Rao, an organic farmer who has consulted for tree groups like Nizhal and even briefly ran a tree clinic many years ago, brings an organic perspective to the question.

“The cutting has to be carried out without the branch breaking at the joint. On the flat surface, organic biocontrol fungicide and pesticide should be applied. The paste of pseudomonas and trichoderma can be mixed and applied to the cut portions. Pseudomonas will take care of fungi and trichoderma, insect pests. If the cost and availability of these solutions are a concerns, the easiest option would be to go in for copper oxychloride, which serves as fungicide, and lime, which can keep insect-pests at bay,” explains Raghavendra.

While injuries can raise the risk of borer attacks in any tree, ageing trees are more susceptible to them.

Raghavendra believes “older trees — those that are 25 to 30 years old and above — can be notified and take care of”.

“Coconut trees are commonly infested with borers, with rhinozeros weevil — black-coloured with horns — being the agent of destruction. This weevil is commonly found in Chennai. It damages the leaf axils and feed on the newly emerging fronds in coconut trees,” says Rajamani.

Raghavendra makes his observation: “Weevils are a big problem — when weevil grubs get in behind the bark, they can eat into the tree quietly unnoticed.”

Says Shobha: “We have been asking the local-body officials that we have to have a sensitive tree health management plan. We are looking at green and living infrastructure to be maintained. Trees give back to us in so many wonderful ways, and the least we can do is ensure they stay healthy and continue this generosity.”