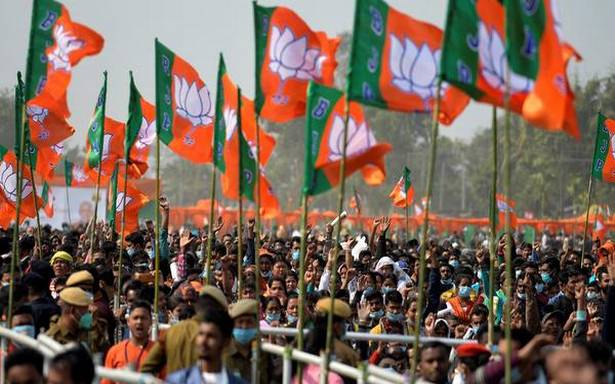 Provincial politics resists Hindutva more strongly than Hindi belt caste politics, but there is nothing inevitable about it

Hindutva’s engagement with regional politics has been opportunistic, historically. Prime Minister Narendra Modi’s politics in Gujarat had a strong dose of provincialism, situated adversarial to what he used to call ‘Delhi Sultanate’. The administrative state at the Centre was portrayed as alien to the nation by Hindutva then; now, its control taken over by Hindutva, the same apparatus is venerated as the sole custodian of the national interest.

The Hindu right has allied with all kinds of regional forces to weaken the Congress. This, despite the former Rashtriya Swayamsevak Sangh chief M.S. Golwalkar’s vision of “one country, one legislature, one executive Centre running the administration throughout the country — an expression of one homogeneous solid nation in Bharat”. State autonomists had it good during the National Democratic Alliance regime led by A.B. Vajpayee — the All India Anna Dravida Munnetra Kazhagam (AIADMK), the Dravida Munnetra Kazhagam (DMK), the Telugu Desam Party, the National Conference, and Trinamool Congress (TMC) sat well with it at various points. A committee appointed by the Vajpayee government to review the working of the Constitution said strong States and a strong Centre could coexist. The Vajpayee government added more languages in the Eighth Schedule of the Constitution; and oversaw the birth of the Bodoland Territorial Council in Assam.

In 2014, many observers wondered whether the Hindutva model in Gujarat could be replicated where caste, class and subnational politics were influential. Unlike many other parts of the country, in Gujarat, only one out of 10 people were Muslims; and caste and tribal grievances were overrun by a sedative mix of religious and provincial resentment and supremacism. As it turned out, the BJP under Mr. Modi swept the Hindi belt in 2014 and 2019. The party got more than 230 Lok Sabha seats from the northern and western States, against the halfway mark of 272. This is excluding the seats won by Shiv Sena, then a BJP ally.

Hindutva’s success in articulating the bonding and grievances of the collective in terms of religion rather than caste, language, tribe, class or gender appears successful in the Hindi belt. The absence of linguistic sub-nationalism has been an enabling factor. But Hindutva faces a more rigorous test elsewhere as the recent Assembly election outcomes among Assamese, Bengali, Tamil and Malayalam speakers who make up a third of India’s population suggest. It is not that these areas are impenetrable. In 2016, the BJP won Assam; and in 2018, Tripura. In 2019, the BJP crossed the 40% vote share in West Bengal. In 2021, it has become the principal Opposition in Bengal.

In West Bengal, the anti-incumbency against the two-term TMC government was unmistakable, this year. But, a considerable segment of those voters who said the TMC was corrupt and inefficient voted for it nevertheless because they loathed the BJP. As the BJP raised the pitch, more Bengalis turned against it, and late deciding voters largely turned in favour of the TMC. In Kerala and Tamil Nadu, the BJP was a factor, despite not being a contender for power. In Kerala, the United Democratic Front and the Left Democratic Front competed to convince the electorate on who fights the BJP better. Among other factors, the winning LDF scored better on this count. In Tamil Nadu, the AIADMK, which supported the BJP’s Kashmir policy, allied with it and paid a price for doing so.

The cultural elites of Tamil Nadu, Kerala and West Bengal resist Hindutva, though Assam might be a different story. In its present form, Hindutva is incapable of negotiating with the claims of exceptionalism of these States. Friendly gestures of BJP leaders such as speaking in their languages and references to their myths and folklore, have often been counterproductive. In West Bengal, elite mobilisation against the BJP contributed to its defeat. In Assam and Bengal, the Muslims consolidated against the BJP. The determinant factor was Hindu consolidation in Assam, which did not happen in Bengal.

Slide of the Congress

The BJP’s growth in non-Hindi areas is happening at the cost of the Congress, Odisha and Telangana being examples. In West Bengal, it has replaced the Congress and the Left. Pan-Indian politics of other types are being replaced by Hindutva, while provincial politics remain strong. In fact, while the slide of the Congress continues, regional leaders who seceded from the mothership are thriving — Sharad Pawar in Maharashtra, Y.S. Jagan Mohan Reddy in Andhra Pradesh, and now Mamata Banerjee in West Bengal. Even K. Chandrashekhar Rao in Telangana can be counted as an ex-Congressman. Here again, Assam is an outlier — Chief Minister Himanta Biswa Sarma decamped from the Congress to join the BJP rather than trying to build any regional politics.

Provincialism within the Congress cannot have the same potency as autonomous outfits. In Assam, the Congress tried to appropriate Assamese sentiments but failed. In Karnataka, former Congress Chief Minister Siddaramaiah sought to add Kannada pride as a component of the party’s politics. Tolerance of sub-nationalisms within an overarching Indian nationalism has been the familiar strategy of Congress politics for long. The BJP has appropriated that framework, with additional Hindutva characteristics. What makes Hindutva more effective is its conception of a pan-India enemy alongside a pan-India unifier, both defined in terms of religion.

If the West Bengal results, alongside the experiment of the Maharashtra Vikas Aghadi, is proof that provincialism is a bulwark against Hindutva, the Assam result is proof that there is nothing inevitable about it. The BJP customised itself for Assam, carried out local recruitment and built a politics that has endured for two Lok Sabha and two Assembly elections. The BJP’s capacity to adapt to regional particularities, however, remains limited.