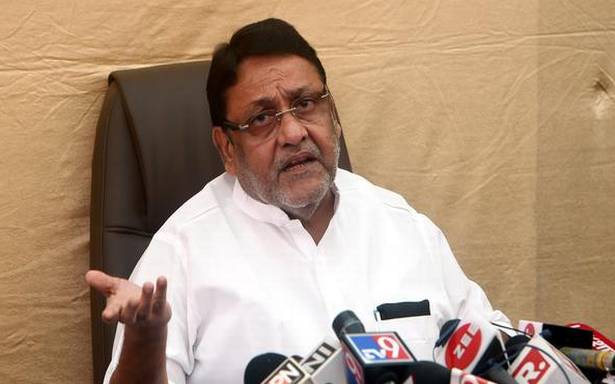 The fierce sabre-rattling between senior Nationalist Congress Party (NCP) leader and Minister Nawab Malik and the Narcotics Control Bureau (NCB) continued unabated, with Mr. Malik on Sunday alleging that an NCB officer had allegedly summoned a witness (panch) to sign back-dated panchnama papers in a case.

Mr. Malik’s fresh salvo at the Central agency comes days after the NCB approached the Bombay High Court to cancel the bail granted to his son-in-law Sameer Khan in a drugs case.

Speaking in Mumbai, the Minister released two audio clips — one of a conversation purportedly between an NCB officer calling a panch to sign back-dated papers related to a case. The second clip allegedly detailed a phone call between the panch and NCB’s Mumbai zonal director Sameer Wankhede, whose tenure with the Central agency ended on December 31.

“There seems to be no end to the NCB’s crooked activities going by the manner in which the agency’s officers have created bogus cases by getting signatures from witnesses on blank papers to frame people. And now, to set those cases right, they are calling witnesses to sign on back-dated panchnama papers,” alleged Mr. Malik. He said he was going to move the courts in this matter.

Mr. Malik has been training his guns on the NCB, especially Mr. Wankhede, since the Aryan Khan-Cordelia cruise case of October 2 last year.

The NCP Minister has kept up a stream of allegations against Mr. Wankhede and the NCB accusing the Central agency of running “a private army” and indulging in extortion business in Mumbai city, while remarking that the Aryan Khan was “no drug bust case” but one of “kidnap and ransom”.

The Minister has claimed that his son-in-law, who was later released on bail, was being deliberately singled out to put pressure on him but that he would not bow and would continue to “expose falsehoods” of NCB officials.

Acknowledging the NCB’s right to appeal in a higher court if they were not satisfied with a particular order, Mr. Malik nevertheless observed that appeals were pending in actor Rhea Chakraborty’s case as well (a drugs case linked to death of actor Sushant Singh Rajput).

“It would have been better had the papers pertaining to Sameer Khan’s case had come [into public domain] from court…But the way the PR agencies circulated unsigned papers of the NCB reflects the agency’s mala fide intentions,” Mr. Malik said.

Targeting the Bharatiya Janata Party (BJP), Mr. Malik claimed that a “very senior BJP leader” in Maharashtra was allegedly lobbying with the Union Ministry of Home Affairs to secure Mr. Wankhede’s extension in the Mumbai unit of the NCB.