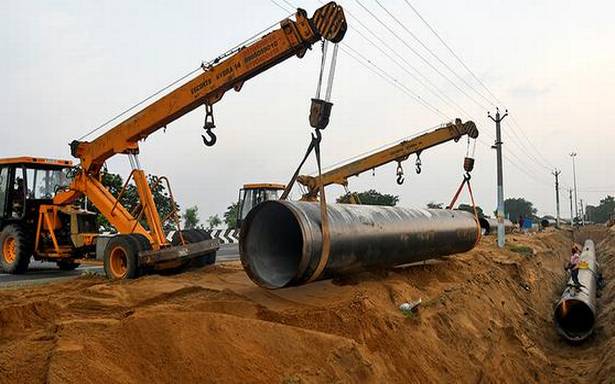 The ongoing project to construct the third desalination plant, with a capacity to treat 150 million litres of seawater a day, at Nemmeli will be completed by April 2023, Minister for Municipal Administration K.N. Nehru said on Saturday.

During an inspection, he instructed officials to expedite ongoing work at Nemmeli, and also initiate measures to start the construction of a 400 mld desalination plant at Perur.

Mr. Nehru noted that nearly 9 lakh residents would have better water supply once the ₹1,259.38 crore desalination plant is commissioned in 2023.

The fourth desalination plant would come up at a cost of ₹6,078 crore, and be completed by December 2025, he added. Treated water would be supplied to nearly 22 lakh people from the new facility.

Highlighting that the city received nearly 727.67 cusecs (cubic feet per second) of Krishna water from Andhra Pradesh daily, Mr. Nehru said the current daily supply of 851 mld would be maintained till December with the available resources.

He said residents could test water samples from open wells and borewells free of cost in 200 depot offices. He asked officials to finish the water quality testing scheme within 10 days.

Metrowater’s Managing Director C. Vijayaraj Kumar and Executive Director P. Akash were among those present during the inspection.