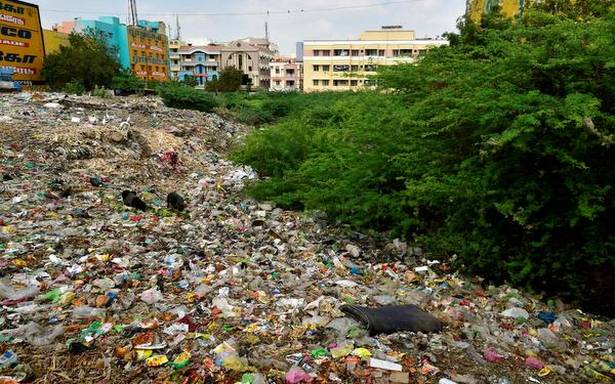 In what should have been a small patch of green between the busy Chathiram Bus Stand and a residential area along Old Karur Road in Mela Chintamani stands a huge mound of garbage.

Compounding the travails of the residents, open defecation is commonplace here. While traffic roars past the bustling Mela Chinthamani, this patch lies on a clearing behind Muneeswarankoil. The garbage mound is mostly domestic waste from nearby apartments, food waste dumped by street vendors, banana leaves used to serve food at these stalls and plastic bottles. Even a decomposing carcass of a dog is lying here for weeks.

A street vendor said the garbage mound has become bigger over the last few months. “Soon after the lockdown norms began to ease, people began to venture outdoors and started dumping the domestic waste here. People from the nearby apartments throw waste right from their windows,” she said.

Another vendor said corporation sanitary workers also use it as a dumping ground. “Their refrain is that they are acting on instructions from their superiors. When we stop residents or anyone from dumping waste here, they ask us why we need to be bothered about it,” he said.

Though the garbage is burnt now and than, the heap accumulates again in no time.