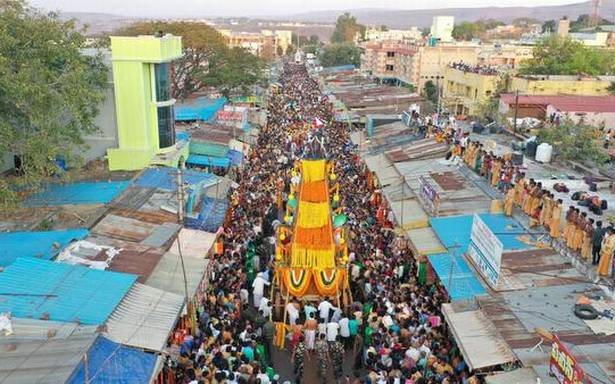 Every road in the Rayalaseema districts and some parts of Telangana led to the Bhramaramba Mallikarjuna Swamy temple at Srisailam on Thursday with devotees converging on the temple complex in thousands.

Every inch of space on the top of the hill was occupied as people queued up for having a darshan of the presiding deities since early hours.

People waited with a bated breath on the hot summer afternoon for the Prabhotsavam in which the processional deities were taken on a tastefully decorated Prabha on the streets around the temple complex. Executive Officer Karanam S. Rama Rao led the procession as Veda pandits chanted hymns and conducted rituals sitting on the sleek chariot.

Devotees took a holy bath in the pushkarini and the Krishna river at several places around the temple town before entering the temple for darshan on Maha Sivaratri.

Security guards kept a keen watch at bathing ghats and on the steps from where the devout came walking with kids and infirm in tow for several kilometres on the hills.

There was a beeline of VIPs coming to the temple. Principal Secretary, Endowments, G. Vani Mohan visited the temple on Wednesday while APSRTC Vice-Chairman P. Thakur along with his wife had darshan on Thursday afternoon. Superintendent of Police Fakkeerappa Kaginelli, who was stationed at Srisailam to keep a tab on law and order, accompanied the VIPs into the temple.

In the evening, several cultural programmes were lined up by the devasthanam authorities. The Kalyanamahotsavam began at midnight.

The Bhramotsavams will come to a conclusion on Friday morning.