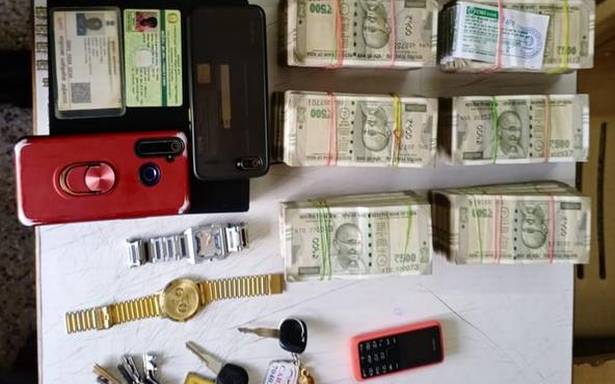 The city police on Wednesday arrested three persons on charges of abducting a retired policeman and demanding a huge ransom for his release.

The hostage was identified as Moosa, 75, a retired sub-inspector and resident of Harrington Road in Chetpet. Mr. Moosa was reportedly into the business of sandalwood and red sanders.

While he was returning from his son’s house on East Coast Road, a few known persons stopped him on the way on the pretext of having a chat. The assailants pushed him into a waiting car and took him to Porur, where they confined him to a de-addiction centre, and handcuffed, and threatened him with a gun. The kidnappers called his son Basheer and demanded ₹5 crore as ransom. Mr. Basheer lodged a complaint in the Kanathur police station.

The gang reduced the ransom to ₹50 lakh and demanded that Mr. Basheer come with the money to Tambaram. The police team and Mr. Basheer waited at the designated place but no one turned up.

Again, Mr. Basheer got a call from the gang demanding ₹25 lakh to be handed over near a shopping mall in Egmore on Tuesday. He, along with plainclothesmen, waited for the gang. One of the suspects got down from a car and received the money. He hurriedly left in a car. A policeman then jumped on the bonnet of the car and tried to stop the vehicle. The other policemen chased the car in an auto. A CCTV captured the rescue operation.

The police rescued Mr. Moosa and arrested Kumar alias Aruppu Kumar, 45, Prakash, 40, and Shanthi, 30, and launched a manhunt to nab three others, namely Gandhi, Vinodh and Mani, who fled the spot. The police seized a large amount of cash from them.

Sources said Aruppu Kumar had been working with Mr. Moosa for long and had criminal cases, including murder and other offences against his name. But the two fell out because of a dispute over payments. So, his gang decided to abduct the retired policeman and get a hefty ransom. As per their plan, they kidnapped Mr. Moosa and kept him in the de-addiction centre with the help of Gandhi and his wife Shanthi in Porur.