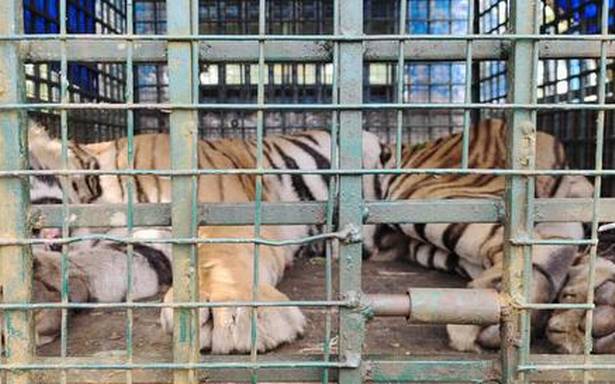 The tiger, captured after a 22-day search, is at the Mysuru Rescue Centre

Tiger, T23, that was captured after a 22-day vigil in Mudumalai is fine and out of sedation at the Mysuru Rescue Centre.

After arriving at the centre, it was loudly roaring and charging from within the cage, said Shekhar Kumar Niraj, Chief Wildlife Warden, Tamil Nadu. He and his team had taken the tiger, that had killed two persons and over 20 cattle, after tranquillising it in the Mudumalai jungles on Friday.

As the tiger had several injury marks and live wounds, the Tamil Nadu Forest Department officials had a detailed discussion with the doctors and rescue officials at Mysuru at midnight and early on Saturday morning. The tiger’s haemoglobin levels were falling gradually, and it was also found to be dehydrated. Treatment and feeding has started from Saturday morning.