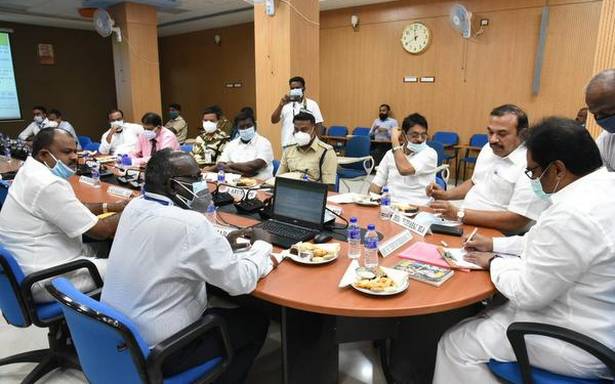 Only if runway is extended to 12,000 feet, wide-bodied aircraft can be operated

With land acquisition process for the proposed expansion of Tiruchi airport not making much headway, Tiruchi MP Su.Thirunavukkarasar has mooted a joint meeting with local Ministers, revenue and airport officials to discuss the issues involved and expedite the process.

He made the suggestion at the Airport Advisory Committee meeting chaired by him here on Saturday. “Now that we have two Ministers from Tiruchi, I suggested to the Airport Director that the Collector may be requested to convene a joint meeting with them. I will also make a request. Revenue and AAI officials can participate in the meeting and discuss ways to sort out of the issues in land acquisition,” Mr. Thirunavukkarasar told The Hindu.

After the first phase of extension of the runway from 6,000 to about 8,000 feet, carried out over a decade ago, the AAI drew up plans to expand it further to 12,000 feet in phases to facilitate operation of bigger and wide-bodied aircraft.

It sought about 683.32 acres, which included about 337.70 acres of defence land. The State government had in 2018 accorded administrative sanction to acquire about 345.62 acres, including wetlands, located mostly at the rear of the airport, mainly for extension of the runway.

A team of revenue officials, headed by a Special Tahsildhar, was formed to carry out the acquisition, but the task is yet to be completed owing to various reasons, including litigations. Some of the land owners, especially farmers, oppose acquisition of their properties.

Mr. Thirunavukkarasar also said that the Defence Ministry is likely to pass orders within a week or so for transfer of a small piece of its land required for the completion of the road overbridge near the railway junction in the city.

Referring to the long delayed transfer of the defence land for the project, Mr. Thirunavukkarasar said that he had recently met Defence Minister Rajnath Singh in New Delhi and pressed for the delinking of the land transfer requests from the State for this project from various other projects, as only a small piece of land (67 cents) was sought. The issue was discussed at a meeting of senior officials of the Defence Ministry recently and the orders are expected shortly, the MP said.

Mr.Thirunavakkarasar, who later inspected the ESI Hospital at Periyamliaguparai, said he would take steps to upgrade the hospital by doubling the bed strength to 100 from the present 50. “The hospital serves as a referral centre for ESI dispensaries in six or seven districts in the region and increasing the bed strength was essential and will benefit a large number of people. Some other requirements such as filling up of vacancies were highlighted to me during my visit and I had promised to take them up. I have also promised funds for improving certain amenities, including establishing a water treatment plant,” he said.