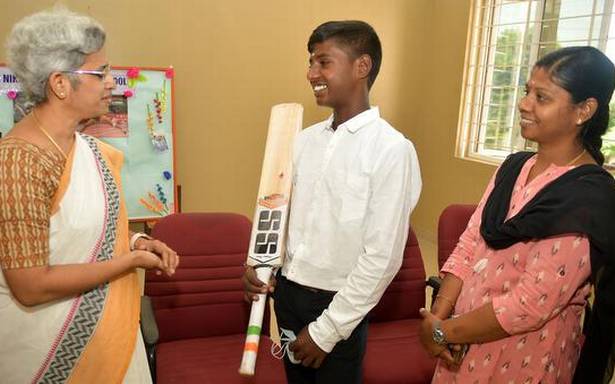 The cricketer has bagged a full scholarship

J. Hemachudesan, a Class VIII student of Kamala Niketan Montessori School, has been selected to receive training at Tendulkar Middlesex Global Academy in Mumbai. The student has bagged a full scholarship and will be trained under notable coaches.

Hemachudesan, son of Jeganathan, a businessman in the city, began playing cricket at KNMS in Class II. He captained the school team from 2015 to 2019. He was felicitated for his achievements at a ceremony at the school on Saturday.

Speaking at the event, Mala Sivakumar, Principal, said that she hoped to see him play for the Indian cricket team some day. “I applaud his efforts and his parents’ support. Parents and students must give due importance to physical education. Students must be encouraged to stay fit and healthy,” she said. Ms. Sivakumar presented Hemachudesan with a cricket bat on behalf of the school as he will soon travel to Mumbai to train at the academy.

Thanking his classmates and the school for recognising his efforts, Hemachudesan said that he would make them all proud.