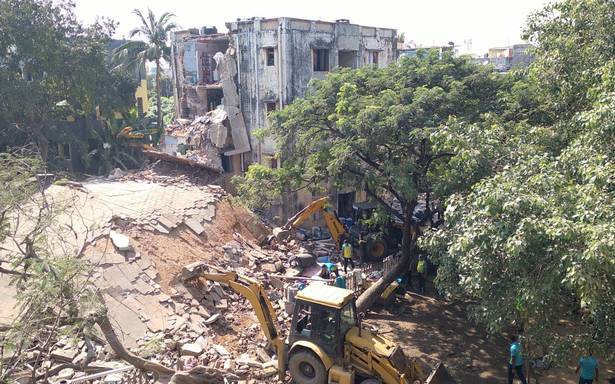 K. Lakshmi, who lived on the first floor of the collapsed building at the Tamil Nadu Urban Habitat Development Board tenements in Village Street in Tiruvottiyur on Monday, cannot believe the happenings of this morning.

“It feels like a miracle. It was as if the building waited for us to get out and soon after it collapsed,” she said.

According to eyewitness accounts, the left wing of the building, which had 24 housing units on four floors and four tenements from the right wing that shared walls with the left wing, collapsed minutes after the people evacuated.

Officials from TNUHDB said that no one was reported missing until Monday afternoon and everyone in the building came out before the collapse.

The ‘miraculous’ escape, as many residents termed the turn of events on Monday morning, was largely due to the intervention of T.M. Thaniyarasu, a former Councillor of the erstwhile Tiruvottiyur Municipality.

Though minor cracks were developing over the past few days, which significantly worsened on Sunday night, the residents said that they did not panic. “We are used to seeing cracks and plaster falling off from the buildings. Hence, we did not feel the need to evacuate,” said R. Lakshmi.

However, a section of residents felt the need to alert someone as the cracks continued to widen on Monday morning. They alerted Mr. Thaniyarasu, who is now an area secretary of the ruling DMK.

“I received a call around 8.30 a.m. and reached the spot soon after,” Mr. Thaniyarasu told The Hindu.

“I climbed only a couple of floors. The cracks on the walls were widening right in front of my eyes. I sensed it was dangerous,” he said.

He said he alerted TNUHDB Assistant Engineer M. Udayakumar, who also suggested that it was better to evacuate the residents.

“I didn’t want to create panic. So, I didn’t tell them that the building was going to collapse. However, I asked them to come down as a precaution. Three of the 24 houses were locked. Around 70 people from the remaining houses came out,” he said.

G. Vijaya, a resident of the collapsed building, acknowledged that it was the shout out by Mr. Thaniyarasu that made all of them come out. “We didn’t take any of our belongings as he asked us to come out soon. We also did not think that the building will collapse like this,” she said.

As Ms. Vijaya was stepping out of the building, she checked the time on her mobile phone. It was 10.10 a.m. According to her the building collapsed ten minutes later.

“We have lost some jewellery, furniture and electronic items. However, we are glad that we are alive. All five people from my family would have been under the debris now if we were not evacuated in time,” she said.