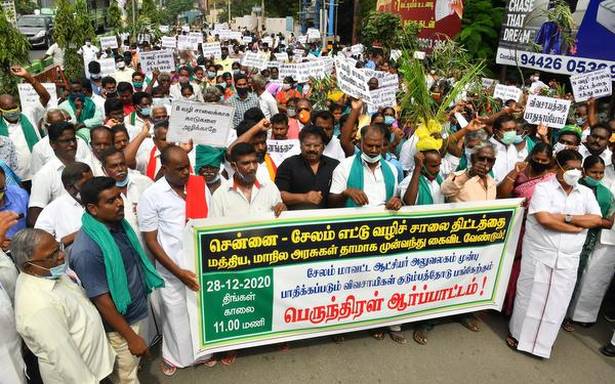 Order issued to withdraw cases against media too

Tamil Nadu government has formally withdrawn 5,570 cases registered those who protested peacefully against the three Agricultural Amendment Laws and Citizenship Amendment Act (CAA) as well as controversial projects such as Salem-Chennai eight lane expressway, methane extraction, Neutrino and Kudankulam Nuclear Power Plant. Cases registered by the erstwhile AIADMK regime against the media have also been withdrawn.

This follows Chief Minister M.K. Stalin’s announcement in the Assembly on June 24 that cases against media and protestors would be withdrawn.

Home Secretary S.K. Prabakar in his order on September 4 said the Director General of Police had furnished details of cases registered for consideration of withdrawal.

The public prosecutor had opined that in cases, where the investigation was still pending or charge sheet not taken on file, further action may be dropped by the police concerned.

In cases where the cases are pending trial, the assistant public prosecutors in charge of respective cases may be directed to move an application under section 321 of the CrPc for withdrawal of prosecution and follow the procedure prescribed therein.