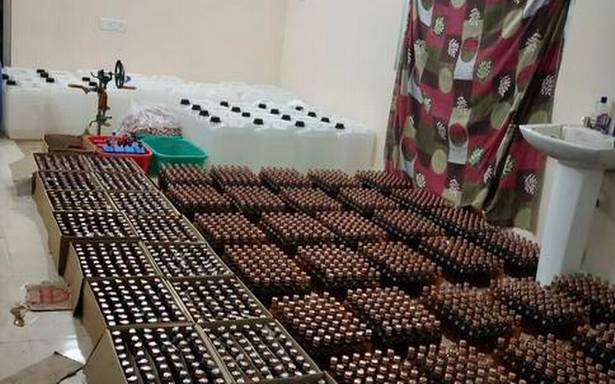 The Enforcement Wing of the Tamil Nadu police on Saturday unearthed two spurious liquor manufacturing units and seized a large quantity of liquor bottles with fake labels, holograms and other machinery in Chengalpet district.

Acting on the instructions of Additional Director-General of Police (Enforcement) Mahesh Kumar Aggarwal, a team of the Central Intelligence Unit, Villupuram Zone Team, which was following a specific input, detected a spurious liquor blending unit at Sathurangapattinam.

Besides seizing ingredients used in the making of liquor and other materials like bottles, labels etc, the team also took possession of a car and motorcycle. Two persons Manikandan (42) of Kumarapakkam and Jayalakshmi (40) of Thirukazhukundram were arrested during the searches.

Based on the input shared by Manikandan, the team detected another spurious liquor blending at Poonthandalam and arrested Sathish (29) of Sathurangapattinam.

The Mammalapuram (Prohibition Enforcement Wing) police have registered a case.